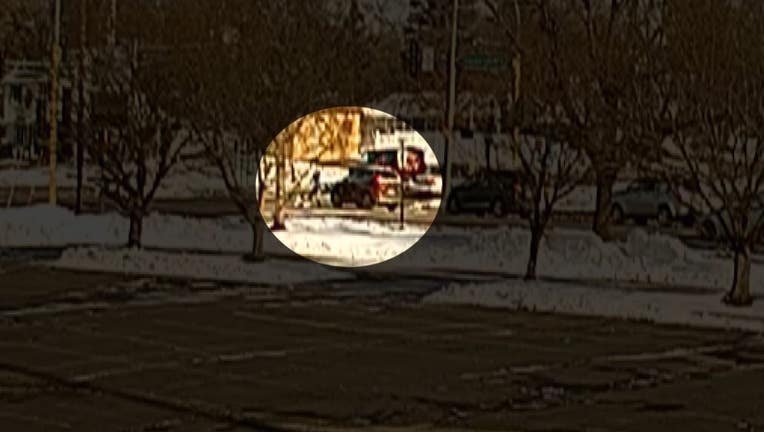 A pregnant woman was bumped by an SUV in Coon Rapids. Now she and her husband are hoping a video might help identify the driver. (Zac Graden)

COON RAPIDS, Minn. (FOX 9) - A couple in Coon Rapids is trying to track down the driver responsible after an SUV bumped into a pregnant woman while she was walking her dog last week.

Zac Graden and his wife Kadie are expecting their first child any day now, but they weren't expecting what happened to Kadie a few blocks from their house.

Search for driver who bumped pregnant woman with SUV in Coon Rapids, Minn.

After a close call in a crosswalk, authorities are looking for the driver who bumped a pregnant woman with their car.

"The phone call I got afterwards, I could feel the emotion coming from her and this fear that I haven't heard prior," said Zac.

Zac says Kadie was walking their dog near the intersection of Northdale and Crooked Lake boulevards last Thursday afternoon. He says Kadie, who is nine months pregnant, went to cross the street. A maroon SUV that was turning right at the corner, stopped at the red light for a moment - Kadie thought to let her pass - but then the SUV started moving forward, bumping Kadie and pushing her back three to four feet in the crosswalk before driving off.

"The baby came to mind immediately, that was the first thing,” said Zac Graden. “Luckily, she headed that off by saying the baby is fine and I'm ok."

Since Kadie only had a vague description of the SUV and didn't get a license plate number, police told the couple it would be hard to investigate. A church at the corner, however, caught the incident on a security camera. Zac posted it on social media, hoping someone might be able to tell the make and model or possibly identify the driver.

"If something comes up down the line - maybe a hip issue - where do we go, especially since the driver drove off," he said.

Zac says his wife wasn't hurt by the close encounter, but she was shaken up and they are both grateful it wasn't worse.

"It’s horrible what happened,” he said. “The most important thing is the baby is going to be taken care of and was not harmed.”

Coon Rapids police say based on the video, the driver could be cited with a misdemeanor for failing to yield to a crosswalk. They say if drivers are ever in a similar situation to stop and call police - even if there are no apparent injuries. That way officers can document what happened in case there are issues later.