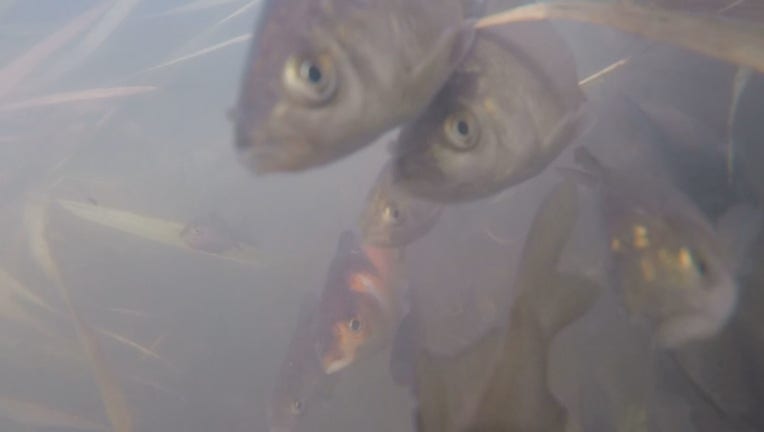 Invasive goldfish are the ire of a group of environmental scientists who are removing them by the truckload from a Chaska Lake.

Under the surface of Big Woods Lake in Chaska, crews were at it again Monday after netting a truckload of wild goldfish from the water last week.

Scientists removing invasive goldfish by the truckload from Chaska lake

Scientists are removing invasive goldfish by the truckload from a Chaska lake.

Jordan Wein, an environmental scientist, was among them.

“Academics who have studied these guys say that they are some of the toughest fish that actually are out there,” he said.

Wein expects the fish were likely dumped there after serving as pets.

“Introducing a non-native species that’s not from that lake into a new water body is illegal and it causes big problems,” Wein said.

Overpopulation has expanded to a chain of at least five area lakes. Another problem is fall migration for spawning is underway.

“Since they can withstand such low oxygen levels, they can usually live in tough times much better than native fish can,” Wein said.

To help trap and remove the fish, crews are using a technique involving sound.

“It’s basically an underwater speaker system to try to herd them away from sound,” he added.

Monday’s fish removal netted around 29,000 fish weighing more than 1,000 pounds. Crews may still b e back for more.

“They’ve moved up to these creeks for some reason. We’re still kind of learning about their behavior out in the wild,” said Wein.

Carver County Water Management has been studying the fish for some time and the goldfish have likely been in the water for a few years.

The captured fish will be turned into compost for soil.