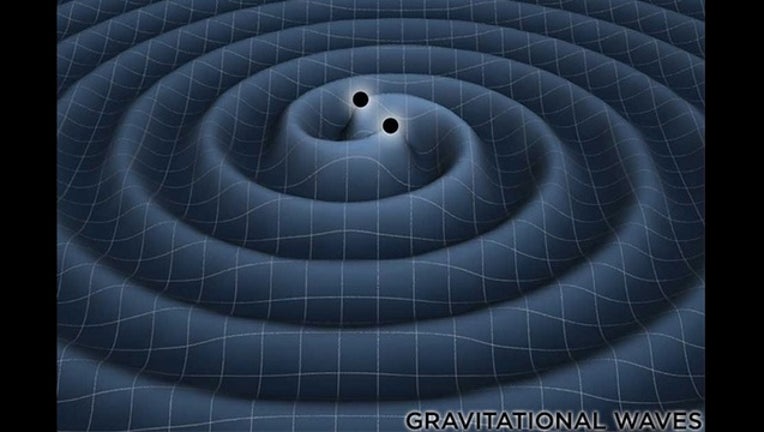 KMSP - For the first time since Einstein revealed his theory of General Relativity in 1915, scientists have measured gravitational waves.  They were measured by an instrument called the Laser Interferometer Gravitational-Wave Observatory (LIGO) which measured the sound this gravitational wave made as it impacted and went through Earth.

Simply put, a gravitational wave is a ripple in space time and is generated when large objects like black holes either accelerate or decelerate.  For example, when a large star explodes, gravity waves carry energy away from the detonation at the speed of light.  Think of it like a shockwave in space.  When something on Earth explodes, there is the actual explosion of flames and heat, but there is also a shockwave of air that is forced outward because of the massive amount of energy being released.  Well the same happens in space, except this shockwave doesn’t occur in an atmospheric environment, since there is no atmosphere in space, so what you get is a gravitational wave, like a ripple on a pond.  But because there was no way to detect these waves, because no one figured out a feasible way to measure space time, we haven’t been able to confirm their existence… until now.  Here’s how University of Minnesota physics and astronomy associate professor Dr. Vuk Mandic described it…

“The observed event is not only the first direct detection of gravitational waves, confirming Einstein’s Theory of General Relativity. It also confirms that stellar-mass black holes exist, that they can live in pairs (binaries), and that the binaries lead a dynamic life potentially merging during the lifetime of the Universe.”

So really, it’s 4 different discoveries in 1.  Now that is a package deal!

More than 1000 scientists, along with Dr. Mandic, from universities across the nation and 14 different countries have been working on LIGO over the last several years.  LIGO is actually two different lasers… one is located in Livingston, Louisiana and the other in Hanford, Washington.  On September 14, 2015 both of these lasers detected a gravitational wave that hit and went through the Earth.  They had discovered 2 black holes merging into 1 causing an astonishingly large amount of energy to pour across the galaxy and head straight through Earth.  Humans have no idea this is occurring because the Earth’s gravity is a far higher force on us than the passing of gravitational waves, making them that much harder for us to detect and measure. So the only way we can detect this minute amount of energy (compared to Earth’s gravity), is to use the brand new LIGO.

So what does this mean for you and me?  Well, for everyday life, nothing.  You will continue to go to work or school, the Earth keeps spinning, and we all will keep whining about how cold it is.  But this HUGE scientific confirmation is hopefully just another step into even more ground breaking discoveries about our galaxy, including more about the Big Bang itself, that unravel the mystery of where we come from and why the Earth exists.