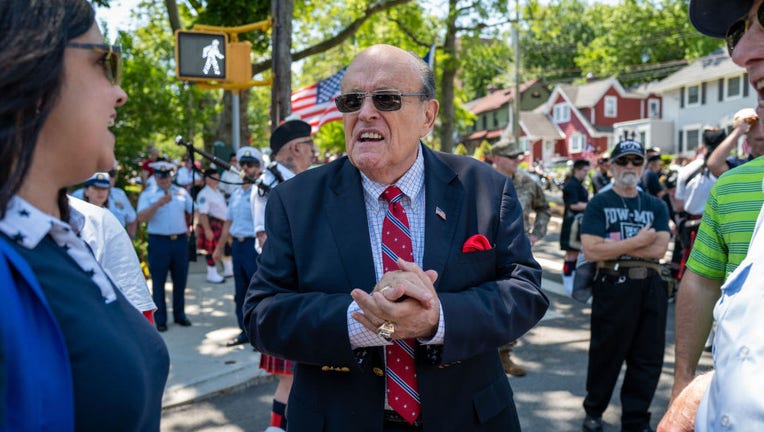 A Staten Island grocery store worker was arrested after he allegedly slapped former New York City Mayor Rudy Giuliani on the back at the store and then cussed him out.

According to the NYPD, 39-year-old Daniel Gill, a worker at the store, approached Giuliani from behind and slapped him on the back at a ShopRite in the Charleston section of Staten Island around 3:30 p.m. on Sunday afternoon.

Video obtained by the New York Post shows Giuliani standing among a small circle of people with his back turned to the surveillance camera. A man approaches, puts his hand to Giuliani's back and continues to quickly walk by. A woman standing next to Giuliani immediately begins to caress his back where the man touched.

Giuliani was out campaigning for his son, Andrew, who is seeking the Republican nomination for Governor of New York.

Andrew Giuliani worked as an aide in the Trump White House and as a commentator on the conservative network Newsmax, but he has never held elected office. His father says that when he was mayor and his son a teenager, his son was helpful to him.

The attacker was taken into custody by the police. Giuliani refused medical attention at the scene.

Giuliani said that he asked for the man to be arrested to make an example out of him.

"Darn right, he should be prosecuted," Giuliani said.

The charges were downgraded against Gill to third-degree assault and menacing along with second-degree harassment after he was held overnight.  A judge released him on his own recognizance.

The Legal Aid Society is representing Gill.  It issued a statement on Monday afternoon.

"The charges facing Daniel Gill, who has no previous contact with the criminal legal system, are inconsistent with existing law. Our client merely patted Mr. Giuliani, who sustained nothing remotely resembling physical injuries, without malice to simply get his attention, as the video footage clearly showed."

The statement went on to say that Gill was followed and threatened by one of Giuliani's associates.

The group stated: "Given Mr. Giuliani’s obsession with seeing his name in the press and his demonstrated propensity to distort the truth, we are happy to correct the record on exactly what occurred over the weekend on Staten Island."

This past week, Giuliani's unsupported accusations of election fraud in the 2020 presidential election and the fallout of the claims became the centerpiece of hearings from the House committee investigating the Jan. 6, 2021, riot at the U.S. Capitol.

FOX 5 NY and The Associated Press contributed to this report.