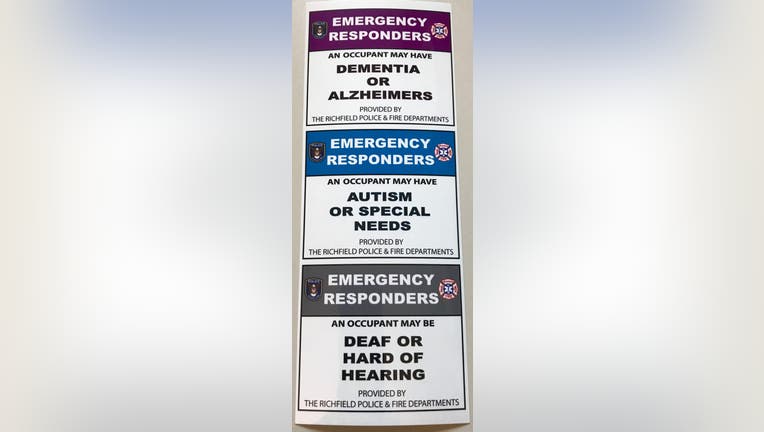 First responders in Richfield can gain valuable information about homes they are entering when residents display stickers like these. (City of Richfield Police Department/Facebook)

RICHFIELD, Minn. (FOX 9) - Richfield Police Chief Jay Henthorne says mental health calls in the city have increased by 300% in the last four to five years, but now the city is utilizing a simple new tool he hopes can help keep people safe in some of those difficult situations.

Richfield Police and Fire borrowed the idea from the Scott County Sheriff’s Office, and now it’s gaining traction among residents in town.

Richfield&nbsp;Police Chief Jay Henthorne says mental health calls in the city have increased by 300 percent in the last four to five years, but now the city is utilizing a simple&nbsp;new tool&nbsp;he hopes can help keep&nbsp;people safe in some of those difficult situations.

"It’s another tool in the toolbox," Henthorne explained.

The tool: free stickers that alert first responders if someone in a home has autism or special needs, dementia, Alzheimer's or is deaf.

"It gives us time to assess what those unique needs are," Henthorne said.

Richfield Fire Chief Mike Dobesh agreed, saying the stickers give his crews intelligence before they make contact with the people inside. The stickers are meant as a warning at the front door, helping police and firefighters deescalate situations.

"We can enter quietly and make sure that we’re attending to that patient’s needs," Dobesh said. "We may talk to the patient differently, or we may show them the equipment that we’re going to be using differently."

It’s a blessing for Polly Schmeling, who says her adopted children have fetal alcohol syndrome.

"The kids can go into rage where they actually physically attack you and others," Schmeling said. "The more you’re talking, the more you throw at them, all you’re doing is fueling it."

Stephanie Mockobee has a sticker for her son with autism.

"We’ll usually open the door and very loudly say 'fire department,'" Dobesh said. "Which, if we’re dealing with an autistic child, may be too much."

"He would stand and look at them with a very confused look and be very hesitant to answer," Mockobee said.

Both Mockobee and Schmeling now trust their small stickers with keeping their families safe.

"I feel better knowing that it’s there," Mockobee said.

"If there’s anything that we can do to help us better serve residents, that’s really what we’re shooting for," Dobesh finished.

First responders in Richfield also use a mobile app, called Vitals, that can give them a heads up when encountering people with special needs.