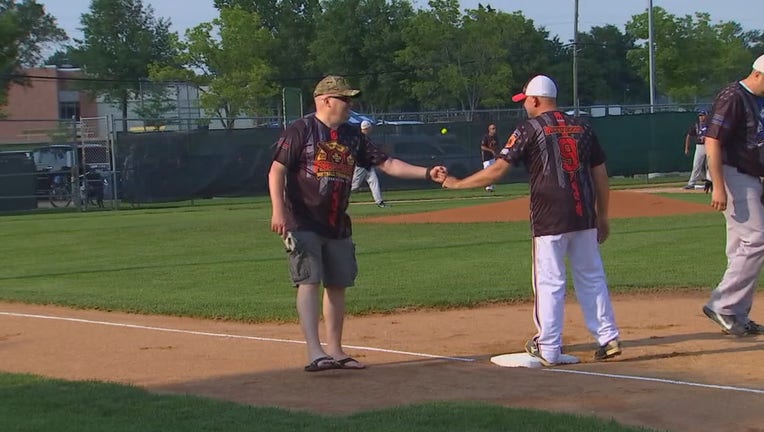 BLOOMINGTON, Minn. (FOX 9) - Softball teams from across the Midwest will be in Bloomington this weekend for an annual tradition that goes back more than six decades, but one of the longtime players will have a different role for this year's event.

Jason Mielke has been a part of the Bloomington Firemen’s Softball Tournament for most of his life, but this year for the first time, he is coaching first base instead of playing on one of the teams.

Jason Mielke has been a part of the Bloomington Firemen’s Softball Tournament for most of his life, but this year for the first time, he is coaching first base instead of playing on one of the teams.

"Sad, surreal," said Mielke. "This year, you know what, I'm going to be a person in the stands enjoying the game."

Mielke helped organize the tournament's kickoff event: a friendly competition between the Bloomington fire and police departments called Guns and Hoses. He's been on the field for every one since it started in 2008.

He retired as a district chief for the fire department earlier this month and had to hang up his mitt along with his firefighter's uniform.

"So I just passed the torch off," said Mielke. "The mind is saying you can, but sometimes the body says no you can't."

Mielke was a spectator at his first Firemen’s Tournament when he was just two weeks old and began participating when he was 18.

He says Guns and Hoses is a chance for the two departments to get to know each other when they aren't responding to a crisis or emergency.

"It’s a time for us to get together away from all the stresses in life the stresses of our jobs and to come out and have fun," said Mielke.

He says Bloomington police have won the game the last several years, but just being together is a home run.

"I'm really rooting for the Bloomington Fire guys tonight. I wish them the best. I know they'll do great. I think we got it this year."