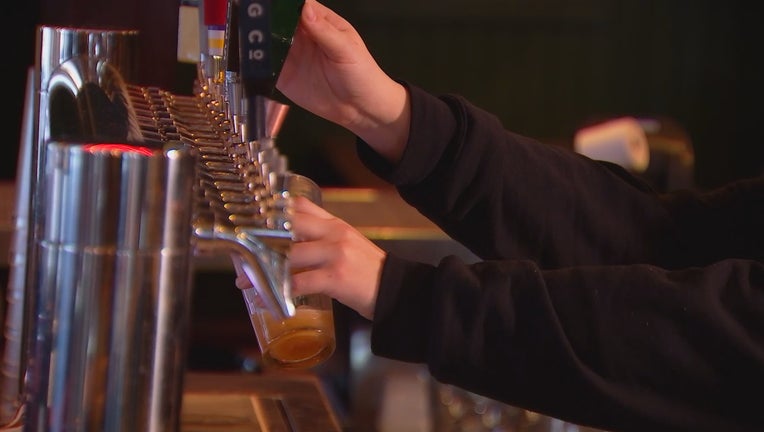 A bartender at Broadway Pizza in Brooklyn Park, Minnesota fills a beer at the tap. (FOX 9)

BROOKLYN PARK, Minn. (FOX 9) - On Wednesday afternoon Governor Tim Walz is expected to announce changes to indoor dining and restrictions at Minnesota restaurants. That means restaurant owners are working to order food and alcohol to serve to customers while trying to bring back staff they had to lay off during the shutdown.

"When you have to let off most of your team, which is, for a lot of us, our family, we have to chase them back up and a lot of them, unfortunately, have already found new jobs," manager at Broadway Pizza in Brooklyn Park, Brad Oleary said.

Restaurants prepare for change in restrictions, some struggle to bring back staff

On Wednesday afternoon Governor Tim Walz is expected to announce changes to indoor dining and restrictions at Minnesota restaurants.

Due to an executive order from Gov. Walz, indoor dining at restaurants in Minnesota has been prohibited since Nov. 21. The current order is set to expire on Jan. 11.

Oleary says he’s been operating with a skeleton crew during the latest shutdown, with only a few people helping with takeout orders, deliveries and serving the dozen or so people they can have on their enclosed patio. He says, getting employees to come back for another uncertain period of time is a challenge, especially if they are making enough money on unemployment.

"If they’re going to give some checks, help out the people, it might be a little more difficult to get people back to work, but so far it’s been pretty good this time," Oleary said.

Even when restaurants and bars are open at limited capacity, employees say it can be difficult to make much money in tips.

"It’s for sure a hit with the business and the tips for bartenders and servers and even hosts themselves, drivers, all of us, we’ve taken a big hit this year," bartender Ana Apostolou said.

She says, there’s been a lot of uncertainty around her job since the first shutdown in March.

Employment uncertainty could be one reason why restaurant owners and managers like Oleary are having a difficult time reobtaining staff after shutdowns.

"How can you expect them to feel any sense of certainty about their livelihood? They’ve been really yanked around a lot here with on and off again employment and that is not for anyone a good way to live your life," President and CEO of Hospitality Minnesota, Liz Rammer said.

She says there’s a "yo-yo aspect" to the restaurant business right now with the unknowns of closures and re-openings. She explained that this makes planning and budgeting challenging for businesses already struggling to stay afloat.

Rammer says she would like Gov. Walz to set some sort of data benchmark that could give business owners an idea of what could close or open based on infection rates, hospital bed availability or another data point.

"If they had a clue of what actually was going to be the marker that we would all know - oh something is coming," Rammer said.

Meanwhile, businesses like Broadway Pizza are trying to estimate what might change on Wednesday and plan ahead with liquor and food orders.

"It’s just a shot in the dark at this point. What we’re going to do is overstock ourselves in the hopes that he does get it going on Monday and Tuesday," Oleary said. "if [Walz] is going to give us a try we’re going to go for it."