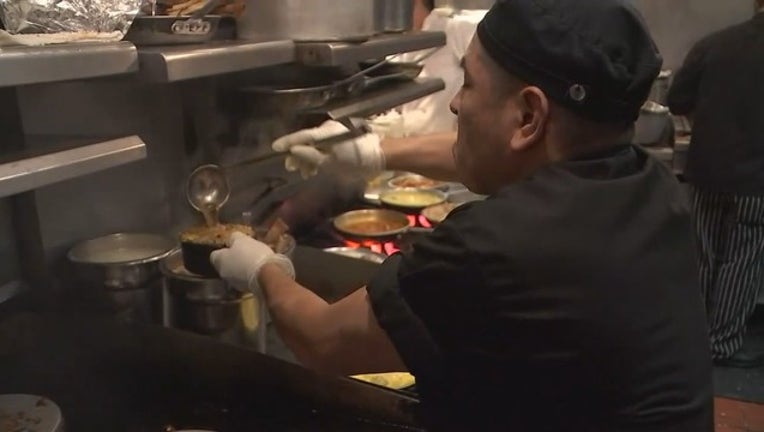 An employee at the Loon Cafe in Minneapolis prepares a dish in the restaurant's kitchen.

ST. PAUL, Minn. (KMSP) - With Minneapolis voting to institute a new $15 minimum wage last year, calls to mirror the policy across the river in St. Paul now pick up steam.

The proposal, however, isn't sitting well with restaurant owners--many of whom have joined a nationwide fight for a tip credit under the minimum wage law that would allow businesses to pay tipped employees a lower base wage as long as their tips get them back to the minimum wage.

It's a heated debate with staunch supporters on each side, as workers say the credit would effectively freeze their wage increases while restaurant owners contend that raising the wage could put them out of business.

Tim Mahoney, the co-owner of the Loon Cafe in Minneapolis, says the move toward a $15 minimum wage is already forcing other restaurants to cut staff in favor of tablets and other automated technology. He even hopes to discuss the issue with St. Paul Mayor Melvin Carter, who made an increased minimum wage a key plank in his campaign platform, at some point in the near future.

"It’s very, very competitive right now as far as wages are concerned," Mahoney said, adding that if the minimum wage is raised it will also drive up the wages of his other employees already making more than $15, putting a strain on his bottom line. "Am I going to have to give them $22? $24? That would put me out of business."

But that's not how local Fight for $15 activist Ginger Jentzen sees it, saying that any increase in the minimum wage will simply change the way profits are distributed, with any restaurants that go out of business simply blaming the minimum wage increase without any evidence.

"It’s really a credit to bosses rather than to workers that would be receiving the tips," she said. "A lot of people who rely on tips for their livelihood are talking about money for mortgage, rent, childcare, for student debt."