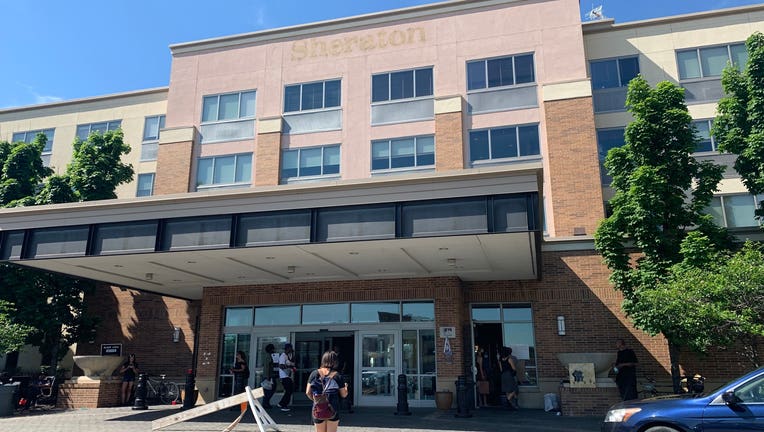 This Sheraton Hotel on Chicago Avenue is now a shelter for people displaced by the unrest that gripped Minneapolis for the past week.

MINNEAPOLIS (FOX 9) - People with nowhere else to go are sheltering at the Sheraton Hotel in Minneapolis on Chicago Avenue thanks to some community organizers.

The length of their stay is unclear, but people say they want it to be a permanent housing solution. For now, it’s a place to go for those who have been displaced by everything happening following George Floyd’s death.

People with nowhere else to go are sheltering at the Sheraton Hotel in Minneapolis on Chicago Avenue thanks to some community organizers.

“I was really heartbroken at the time,” said Deonte Abu Bakr Bryant, who is staying at the Sheraton after his car, which was his home, was lost in the riots. “I had to sit there and watch it burn.”

Many things have been destroyed in Minneapolis over the past week, and for some, that includes their home.

For the south Minneapolis native, he was left without a place to stay after the area of the third precinct was burned and looted Thursday night. Then he heard what was happening at the Sheraton on Chicago Avenue.

“I don’t think anyone has done this before,” said Rosemary Fister, an organizer.

What was recently a hotel is now a place to stay for those displaced by the riots and fires, including a homeless encampment along Hiawatha near the third precinct.

“There’s nobody in charge, we’re all leaders here, we’re all just taking care of each other,” said Fister. “It’s the residents who are at the center of this.”

Those who are loosely organizing what’s happening at the Sheraton say the owner of the hotel had plans to evacuate over the weekend and has been working with them since they moved in shortly after.

“He’s been great. He’s been super gracious,” said Fister. “On Saturday, when we told him we weren’t going to be leaving and we had some more people that were coming that we were going to be staying here now he rolled with it.”

At this point, the group of some 250 people has no plans to leave.

“This is permanent,” said Bryant. “We are here to stay.”

The owner of the hotel said he would not be making a statement, but he has apparently been inside helping with the effort and will make a more formalized statement after things are finalized.