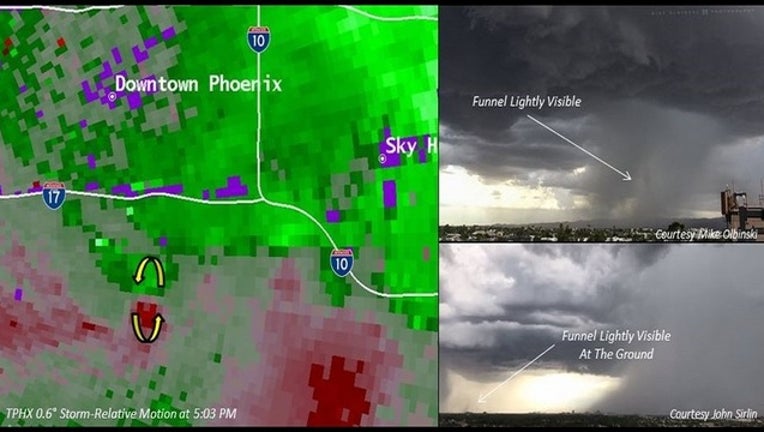 KMSP - For those that think mountainous and even desert locations can’t get tornadoes, think again.  What’s called a landspout tornado touchdown just south of downtown Phoenix on Thursday.  While it was very brief, and didn’t appear to cause any substantial damage, it took many people by surprise because nobody thinks of tornadoes in that part of the country.  The twister was caught on Doppler radar as well as a couple different photos sent into the National Weather Service which were pointed out in a tweet Thursday evening.  Landspout tornadoes are a little different than the conventional tornadoes we typically see in Minnesota, because they aren’t associated with Supercells, the parent storms that eventually form tornadoes.  Landspouts form when a unique set of circumstances causes rapidly rising air to spin and reach the ground.  They are far weaker than “normal” tornadoes, with winds typically 60mph or less, but can still cause damage to roofs, windows, and trees.

While tornadoes in Arizona are rare, the state does average a couple every year.  In fact, in 2010, there were 17 confirmed tornadoes in the state with 2012 being the last year that no tornadoes were seen.  The Phoenix area saw another brief tornado touchdown just 2 years ago in 2015.