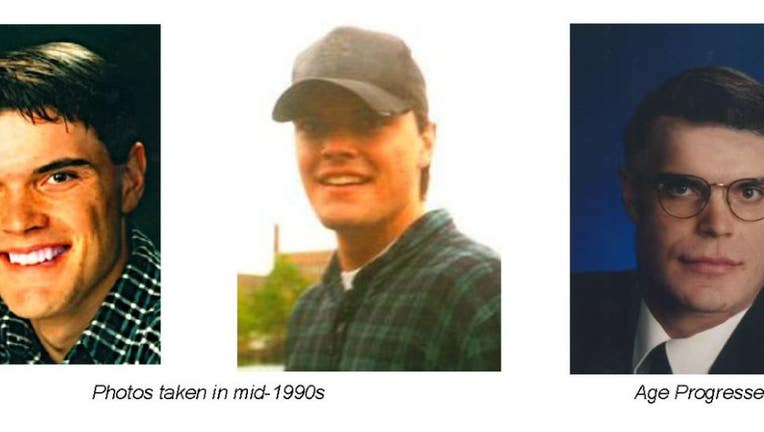 Old and age-progressed photographs of Andrew Edberg, who was last seen 21 years ago today.

WHITE BEAR LAKE, Minn. (FOX 9) - Twenty-one years ago Tuesday, then 21-year-old Andrew Edberg was last seen at a bar in White Bear Lake and now Ramsey County officials are asking for the public’s help in finding him once again.

The Ramsey County Sheriff’s Office renewed their plea for information about Edberg’s April 14, 1999 disappearance, offering an age-progressed photo and confirming that the case is still under investigation.

The night Edberg disappeared, he was last seen at Decoy’s Bar near Hwy. 61 and Fourth Street in White Bear Lake. He was wearing charcoal gray corduroy pants and a white shirt.

Later that night, his truck was found in the ditch near I-35E and I-694 in Vadnais Heights, Minnesota. The doors to the truck were locked and the lights were off. He has not been seen or heard from since that night.

Anyone with information is encouraged to contact the Sheriff’s Office at 651-266-7320.