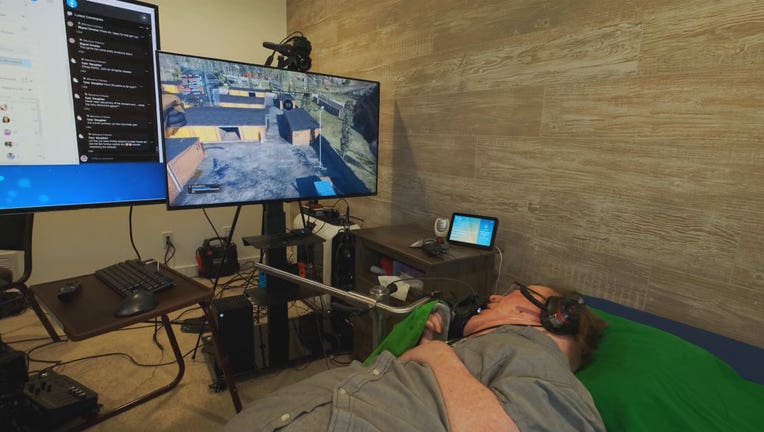 This quadriplegic Rochester man is a professional video gamer and his efforts have helped pave the way for more accessibility in gaming.

ROCHESTER, Minn. (FOX 9) - It’s a lot of kids’ dreams to make a living playing video games when they grow up, and that’s exactly what a 41-year-old Rochester man who doesn’t have use of his hands is doing.

Randy Fitzgerald never imagined he would be able to make a living playing video games.

Randy Fitzgerald has made a career out of video games despite being a quadriplegic. Now, his success and efforts are paving the way for more accessibility in the gaming world.

"I can’t play sports," Fitzgerald said. "Can’t play basketball or football, so when my friends would go out and play these sports games, I couldn’t follow, so I played video games."

Fitzgerald was born with Arthrogryposis, a rare disorder that causes frozen joints and underdeveloped muscles in his arms and legs.

Even though he can’t use his hands, he uses his chin, lips and other facial muscles to operate a controller to play online video games like Call of Duty and Street Fighter.

"So, basically, I play sideways," he explained. "My brain is programmed to play video games sideways. That’s basically how I play."

He has been playing video games since his dad brought him along to the arcade at the local bowling alley when he was three.

"He could see in my eyes how much I wanted to play, so one day, he pulled a pinball machine up next to the Pacman machine, laid me on my stomach on top of the pinball machine so my chin could reach the joystick and I played Pacman like that. Eventually I got really good. I played on it for hours on one quarter."

After high school, Fitzgerald started going to the Electronic Entertainment Expo, where he got to know video game developers and professional gamers. By 2006, he was blogging for Microsoft when he cause a sensation at the Expo while trying out a new Sonic the Hedgehog video game.

"At the after party, I was playing Sonic. The next thing I knew, there was a media frenzy behind me. They had never seen anyone play video games without adaptive technology the way I played before," he said.

The next year, Fitzgerald joined an esports team in a competitive tournament, even though their opponents didn’t believe it at first.

They lost on the second day of the tournament, but Fitzgerald won a following as the first quadriplegic professional gamer playing under the name NOM4D, which he chose for philosophical reasons.

"The me, a nomad is someone who is still searching for their meaning in life and along the way, what they’ve learned through their wisdom and travels they share with everyone they meet," he said. "Basically, that’s who I am."

These days, Fitzgerald gets paid to stream himself playing video games seven hours a day, several days a week on Facebook Live.

"I definitely made a career out of it," he said. "I don’t like calling myself professional. I always feel weird. People call me a celebrity online. It doesn’t feel right. You are not my fans you are my friends."

In the process, he has inspired other disable players to set their sights on video games, too.

There’s even a control configuration named after him in Call of Duty.

"It definitely good to know that I’ve helped pave the way to accessibility in video games where there wasn’t really before," he said.

Eventually, Fitzgerald wants to go from playing video games to designing them and start his own esports league as well. In the meantime, it won’t be game over for him anytime soon.

"I imagine myself lying in bed at 90 asking the nurse to set up my controller so I can play some Pacman, but no one will know what Pacman was. I imagine playing until I can’t anymore," he said.