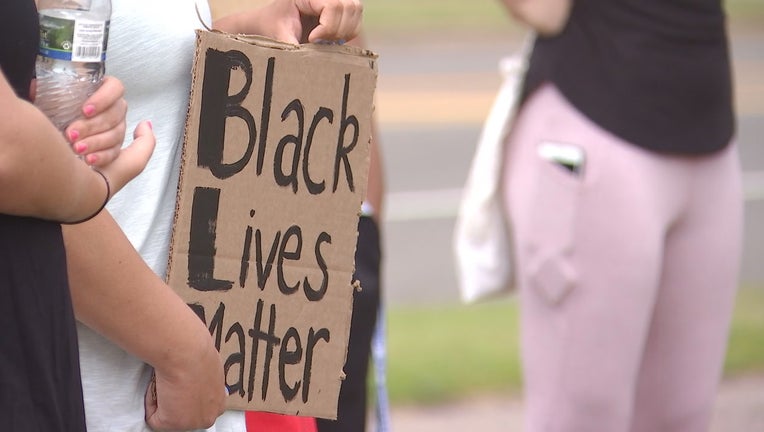 COON RAPIDS, Minn. (FOX 9) - A group of protesters rallied on Saturday, calling on a Coon Rapids principal to step down for an incident in 2015 in which a student was forced to apologize after stating support for the "Black Lives Matter." They are also pushing the district to take further steps to act against racism.

The rally was just one of the many protests and calls to action that have followed the death of George Floyd, as activism has moved from Minneapolis and St. Paul out to the suburbs.

A group of protesters rallied on Saturday, calling on a Coon Rapid principal to step down for an incident in 2015 in which a student was forced to apologize after stating support for Black Lives Matter, while calling on the district to take further steps to act against racism.

Outside the Coon Rapids High School, the calls for change were heard loud and clear.

Several dozen people showed up to protest what they call racism in the Anoka-Hennepin County School District. They shared stories about microaggressions faced by students of color over the years. That includes a story about how a student had to apologize to the entire student body after voicing her support for Black Lives Matter while reading school announcements five years ago.

The group has a list of demands, ranging from the firing of the Coon Rapids principal to revising student discipline policies.

"We just want to apply pressure to the school district in general on how they don't handle racism or mental health very efficiently within their schools," added Taylor.

But some say the diverse turnout for the protest is proof better days are ahead.

"People tend to stay to themselves here and when you see it happening like this, it is definitely a sign that change is coming," said Claudius Brown, who attended the demonstration.

In all about 60 people turned out for the protest and organizers say they plan to have further demonstrations in the future.