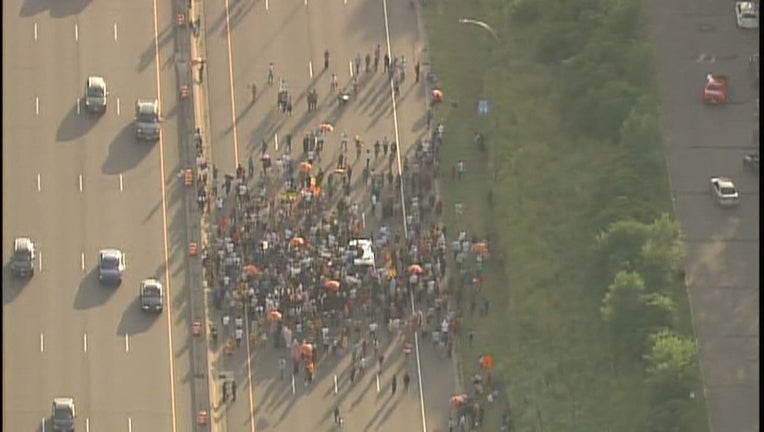 A group of protesters shut down a section of I-94 in response to the unrest in Ethiopia after a famous singer was killed. (FOX 9)

ST. PAUL, Minn. (FOX 9) - Protesters marched onto I-94 in St. Paul Wednesday evening in response to the unrest in Ethiopia.

Deadly protested have broken out in the country after a famous singer, Hachalu Hundessa, was shot dead. Hundessa, who was killed on Monday was known as a prominent voice in anti-government protests that led to a change in leadership in 2018, with Prime Minister Abiy Ahmed taking office. Hundessa wrote songs that were about the of the Oromo ethnic group in Ethiopia.

Protesters march onto I-94 in St. Paul in response to unrest in Ethiopia after death of singer

Protesters marched onto I-94&nbsp;in St. Paul Wednesday evening in response to the unrest in Ethiopia.

For about nearly two hours, demonstrators gathered on westbound I-94 before getting off on Lexington Avenue and moving north.

Protesters told FOX 9 they don't want political leaders in the United States to fund the Ethiopian government because they say it's corrupt. Demonstrators also say communications to Ethiopia has been cut off.

"That’s why we are trying to be a voice for them because they don’t have a  voice," said Anwar Kamal, a protester. "And a lot of people are dying. It’s really sad. Including my family, my brothers. I’m worrying too much. we don’t know what’s going to happen to them."

According to the U.S. Census, in 2018, one of the largest groups of foreign-born Minnesotans were born in Ethiopia, making up about 21,900 people. However, census officials say this is likely an underestimate and the total does not include U.S.-born children of these immigrants.

The Oromo Community of Minnesota is calling on Oromo communities around the world "organize, mobilize, and strategize on how we can go forward."