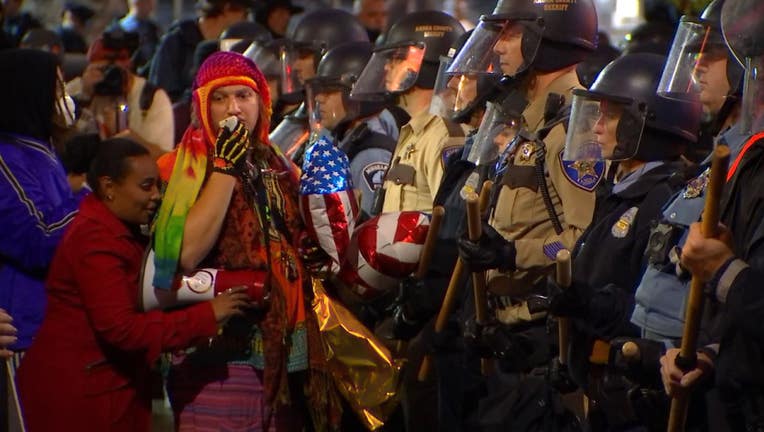 Police and law enforcement form a line during the protest outside campaign rally for President Donald Trump.

MINNEAPOLIS (FOX 9) - Downtown Minneapolis business owners, protesters and lawmakers are sharing their thoughts on how police and law enforcement handled operations at President Donald Trump’s rally and the protest.

From multi-layered crowd control outside to orchestrating thousands of Trump supporters in and out of the Target Center through the skyways, there was an increased police presence for the presidential rally.

Throughout the night, police made one arrest for damage to property and issued one citation for disorderly conduct. Minneapolis Police Chief Medaria Arradondo released a statement saying while the protests were largely peaceful, some officers were assaulted and objects were thrown at some officers.

The Downtown Minneapolis Neighborhood Association and Downtown Council commended the Minneapolis police and law enforcement agencies for how they handled the presidential visit, which was highly contentious from the start.

“I think we can chalk up another success,” said Steve Cramer of the Downtown Council. “And this one had the potential to be a little more volatile.”

Wyatt Miller with the Anti-War Committee helped organize a group of protesters outside Target Center. He's more critical of how the day was handled, despite the efforts to keep those for and against the president separated.

“There were multiple instances where belligerent Trump supporters who were getting violent and trying to do provocations on a crowd, and we saw the police either standing by and doing nothing or proactively trying to protect those people on Trump’s side,” said Miller.

During the president’s speech and hours after most protesters left is when things heated up the most. State Representative Aisha Gomez (DFL – Minneapolis) tweeted from the middle of it all, incorrectly claiming Mayor Jacob Frey honored her request not to use more chemical irritants. She later backtracked those comments.

“They act instantly to disperse a crowd, but they also create chaos and escalate situations that don't need to be escalated in my opinion,” said Rep. Gomez.

However, overall, Rep. Gomez says she believes the event was handled well.

“If there is one person arrested and one citation when you have thousands of people, we can call that a success,” said Rep. Gomez.