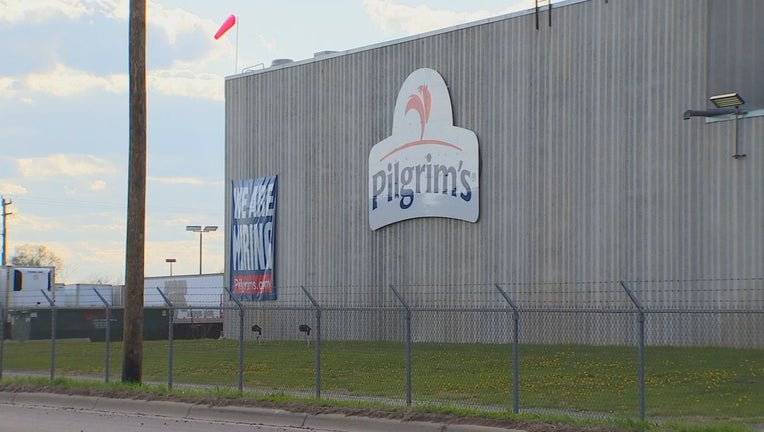 ST. CLOUD, Minn. (FOX 9) - Stearns County is emerging as a hotspot of COVID-19 cases and two employees of a poultry processing plant there say they have the virus and are not satisfied with the safety implemented for workers.

They've worked at Pilgrim's Pride Poultry for nearly three years now. But, during the pandemic that has sickened some workers, they say the plant has taken no precautions for workers who are being told to return.

"There was no conversation from the company about COVID-19 with employees," explained worker Mohammed Burale through an interpreter. "He says he noticed myself not feeling well the beginning of last month which was April."

Burale, an employee of Pilgrim's Pride Poultry Processing Plant in the St. Cloud area, described the days leading up to being diagnosed with COVID-19. He says out of the 95 people who work in his department, all of them are sick.

"Most of the people at the plant are sick and he said they asked for time to lower the curve because everybody was getting sick," Burale said. "They said no, if you decide to go home, that you are fired."

Meat processing plants nationwide are quickly becoming major hotspots of the COVID-19 pandemic where the virus spreads like wildfire among employees who cannot social distance well.

Several, including JBS Pork in Worthington, have had to close and take extra safety precautions before bringing workers back.

"We are really pleading to this company and other companies to follow suit with best managing practices to keep these individuals, their employees safe," said Jaylani Hussein with the Council on American-Islamic Relations.

Hussein says the overwhelming majority of employees at these upper Midwest plants are east African and many don't speak English.

His group is helping to advocate for them and filing requests for OSHA to investigate working conditions at Pilgrim's Pride.

Another employee of the plant who did not want to disclose her identity is also sick. She and her husband both came down with the virus last week. She's scared to death to return to work and potentially leave her 10-month-old baby an orphan.

A spokesperson for the plant says they will not operate if they don't feel it's safe and they say no one is being forced to work.

They are taking temperatures and providing PPE.