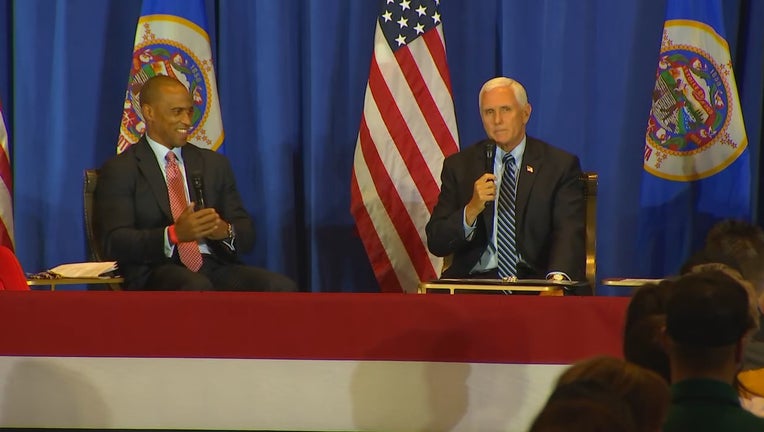 Pence and President Donald Trump's daughter, Ivanka, first made an unannounced stop at a north Minneapolis business that burned during the rioting. They then led a discussion with four business owners and a police association official at a hotel at Minneapolis-St. Paul International Airport.

Vice President Mike Pence on Thursday brought his law-and-order message to Minneapolis, the city where George Floyd was killed.

"People out there need to know these stories," Pence told a crowd of a few hundred people inside the hotel ballroom. "It just steels our resolve."

Pence arrived about 75 minutes behind the schedule released by his campaign a day earlier. That left supporters waiting inside the ballroom with limited social distancing for more than two hours. About half of the people wore masks, which are required in indoor public spaces in Minnesota to slow the spread of coronavirus.

Pence and Ivanka Trump first visited Flora's Hair Design, a north side salon that burned in late May. Flora Westbrooks, who owns the business, said she was devastated.

"It was hard to stand there and see your business burn," Westbrooks told the vice president. "I just want my business back."

Lloyd Drilling, the owner of Thurston Jewelers in south Minneapolis, criticized Mayor Jacob Frey and Gov. Tim Walz for their slow response to the unrest. Civil disorder and rioting happened for four nights before local police, the Minnesota State Patrol, and Minnesota National Guard got it under control. Frey and Walz have pointed fingers over the National Guard callout.

Riot-damaged businesses have gotten little relief from the government. The City of Minneapolis has announced a modest program to help businesses rebuild. A $300 million proposal in the Democratic-led Minnesota House stalled because of opposition in the Republican-controlled Senate earlier this year.

Pence slammed the Minneapolis City Council for attempting to dismantle the city's police department. Earlier this year, a majority of council members advocated for abolishing Minneapolis Police, though they have been unsuccessful at getting the issue on November's ballot. In recent weeks, council members have demanded more from police amid a crime spike in several of their wards.

"When did it start to go bad with your elected officials?" Pence asked Matt Hagen, a Hennepin County deputy and president of the Minnesota Fraternal Order of Police. Hagen said he's seen greater animosity between city officials and police within the past five to six years.

Hours before Pence's visit, Walz activated the National Guard to help law enforcement with security. A hundred soldiers were mobilized. The activation came following a request from the City of Minneapolis.

"Out of an abundance of caution for the safety of Minnesotans, we have asked the Minnesota National Guard to assist in keeping the peace," said Walz in a statement.

Democrats held a virtual news conference to slam Pence's visit. They said little about the vice president's police message, focusing instead on accusing the Trump administration of botching the pandemic.

"I don’t understand how we can look at 200,000 Americans dead over six months and not call that a public safety issue," said Lindsey Port, a DFL candidate for state Senate.

Pence did not mention the pandemic during his Minneapolis event.