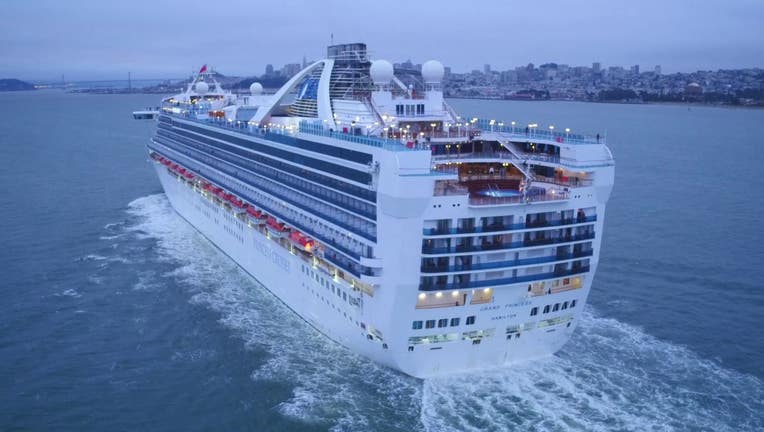 Grand Princess cruise ship as it passes through the San Francisco Bay on June 27, 2017. (Duncan Sinfield)

(FOX 9) - Forty-two Minnesotans are among those quarantined on the Grand Princess cruise ship off the coast of California where 21 people on board have tested positive for the coronavirus.

Saturday, health officials also confirmed the man who became the first confirmed case of COVID-19 in Minnesota was also a passenger on the Grand Princess.

Forty-two Minnesotans are among those quarantined on the Grand Princess cruise ship off the coast of California where 21 people on board have tested positive for the coronavirus.

According to health officials, the patient, who is over the age of 65 and has an underlying health condition, was one of 26 Minnesotans who disembarked the Grand Princess on February 21. He began to show symptoms afterward and tested positive on Friday for the illness. The Minnesota Department of Health says he has had "limited contact" with other people since leaving the ship.

After the February 21 stop, the Grand Princess continued on the second leg of its trip toward Mexico then Hawaii before heading back to San Francisco. Sunday, the cruise line announced that it will now be allowed to dock at the Port of Oakland.

Of the 21 cases on board the Grand Princess, officials say 19 patients are crew and two are passengers.

More than 3,500 people total are on the ship. Among the passengers is a Plymouth, Minnesota couple. Robert Henry and his wife says they are feeling fine but confined to their cabin as the quarantine on the ship is underway.

Until then, the couple was enjoying their vacation -- a birthday gift so Henry could finally visit Pearl Harbor. But now, uncertainty lies ahead.

"There’s lots of little things," said Henry. "I’m going to run out of my medication in a few days. I'm going to have to get those in here. I’m sure there are people with a lot more serious medical issues that they’re going to have to deal with. Now we planned for maybe a few extra days but not for a couple of extra weeks."

"We just would all like to know what’s going to happen," he added. "I think there are 42 Minnesotans on the boat. We’ll all be home sooner or later. They’re taking good care of us."