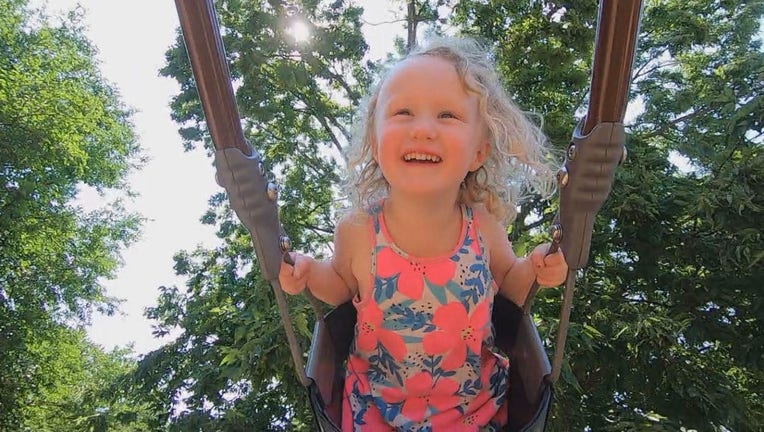 Greta Osterholm, 3, underwent a heart procedure that had a faster recovery time than the more traditional method.

MINNEAPOLIS (FOX 9) - Three months removed from heart surgery and Greta Osterholm is feeling great, bouncing around a playground like a three-year-old should on a sunny, July afternoon.

"She basically has a clean bill of health," said Ryan Osterholm, Greta’s father. "We’ll maybe check in every year for a few years. After that, it’s fixed."

Three months removed from heart surgery and Greta Osterholm is feeling great, bouncing around a playground like a three-year-old should on a sunny, July afternoon.

Greta was born with a hole in the wall between the heart’s two upper chambers - a significant health issue if left untreated. An initial attempt to repair the defect with a catheter procedure through her leg failed because the hole in her heart was too large. The Osterholm’s initial medical team then said the next option was full-blown open-heart surgery, requiring the cracking of her sternum.

"Panic, shock," said Ryan. "We weren’t expecting to have to do that. You obviously do what’s put in front of you. It was a really difficult day obviously."

The family sought out a second opinion at M Health Fairview University of Minnesota Masonic Children’s Hospital, where pediatric cardiac surgeons have fine-tuned a unique procedure that’s performed at just a few medical facilities across the country.

The procedure, called a vertical right lateral thoracotomy, allows the repair to be made through a small incision under a patient’s armpit. It produces the same results, but does not require the cracking of bones, has no long-term surgical scars on the chest and has a faster recovery.

Greta was in and out of the hospital in just a couple days.

"The whole goal of treating these children with congenital heart disease is trying to have them be as normal as quickly as possible," said Dr. Gurumurthy Hiremath, a pediatric cardiologist at M Health Fairview. "That’s what we want to achieve. And I think with an innovative surgery like this, we were able to get her to be a kid as soon as possible."

"That’s one of the things we all learn from operating on infants and newborns," said Dr. Sameh Said, a congenital heart surgeon at M Health Fairview. "You have to be absolutely precise and meticulous, and paying attention to all the details. All of the details."

To Greta’s parents, it made all the difference to have their little girl back home.

"It was amazing," said Monica Osterholm, Greta’s mother. "Better than we expected going in. To spend two nights in the hospital and be out, literally chasing me to the car. We are super grateful."