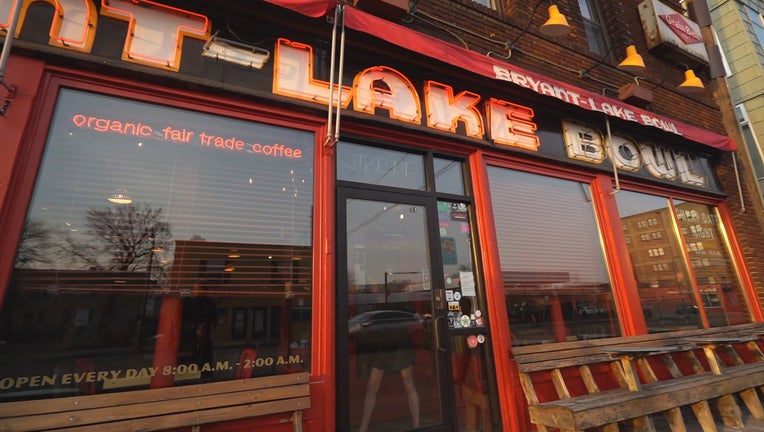 Bryant Lake Bowl is a staple of Lake Street and has been for decades, but a drone pilot created a video that gives a never before seen perspective of the Minneapolis mainstay.

MINNEAPOLIS (FOX 9) - Bryant Lake Bowl has been a hot spot in south Minneapolis for nearly 30 years, but a new video offers a perspective of the neighborhood watering hole not ever seen before.

Jay Christensen created a minute-and-a-half-long video of a drone flying through the popular hangout, which he says was an honor.

Bryant Lake Bowl has been a hot spot in south Minneapolis for nearly 30 years, but a new video offers a perspective of the neighborhood watering hole not ever seen before.

"Bryant Lake Bowl is a staple in Minneapolis and on the Lake Street community, so being able to remind people how awesome that place is has been awesome," he said.

The aerial tour is all one shot as the drone moves through the bar, bowling alley and theater. It makes you feel like you’re there.

Christensen admits it took a few takes to get the timing just right. It’s a process he is used to, however, as he and his coworkers at Rally Studios have also completed several one-take fly-throughs for the Timberwolves, the Grand Theater in Plymouth and the Rosedale Mall.

The videos allow his team to flex their creative muscles and help businesses that have been struggling for the last year or so.

Christensen is grateful his latest video is shining a spotlight on a well-deserved destination and he hopes it’s a strike for Bryant Lake Bowl for the foreseeable future.

"For us, it’s a win-win," he said. "We’re able to work on our creativity and our craft and, in the meantime, they can have a really cool video they can use to promote."