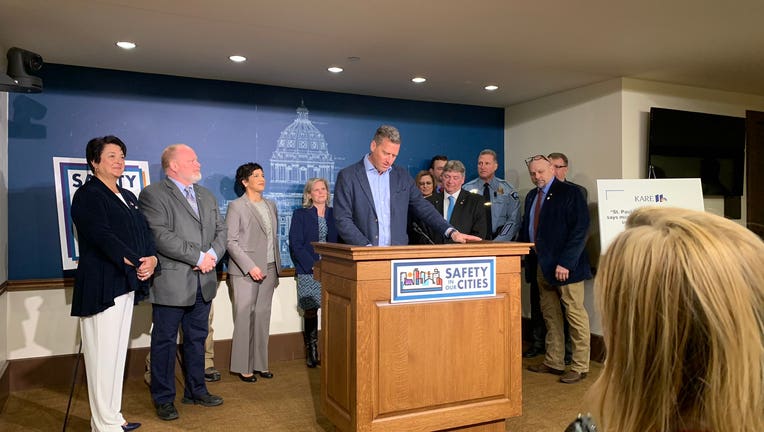 Members of the Minnesota GOP pointed fingers at city leaders for what they say is a violence problem in Minnesota cities that is being ignored.

The House GOP's proposals would require Metro Transit to position more officers on light rail platforms. Minneapolis and St. Paul would have to station an "adequate" number of cops at sporting events and concerts. Any city that doesn't conform would risk losing state aid.

But the news conference quickly turned tense when Daudt said the mayors of Minneapolis and St. Paul had refused to go along with their police chiefs, who had requested significantly more officers in 2019. Frey, who was sitting in the audience near reporters during the GOP's news conference, said "Not true!"

Frey then took the microphone, criticizing the policy proposals and accusing the GOP of lying about his record.

"This press conference was filled with misinformation and lack of fact," Frey said.

In 2019, Minneapolis Police Chief Medaria Arradondo said the city would need to add 400 new police officers by 2025. Staffing shortages meant MPD could not immediately respond to thousands of the highest-priority 911 calls in recent years, Arradondo said.

Frey proposed adding 14 new officers in 2020, but activists shouted him down during his budget address at city hall. That was a foreshadowing of the difficult fight in the fall. Facing opposition from city council members, Frey and the council struck a last-minute deal to add an extra recruit class in 2020.

The additional recruit class would not allow Minneapolis to go above its current limit on sworn strength, 888 officers. But it would more easily allow the city to reach 888 positions, which is rarely met because of attrition.

Daudt accused Frey and St. Paul Mayor Melvin Carter of spending too much money on bike lanes and bans on plastic straws and plastic bags, at the expense of police. But when pressed by a reporter, Daudt acknowledged that's not how state aid to cities works.

"No, but it'll make a good sound bite for the news tonight," Daudt said.

Frey jumped on the minority leader's "sound bite" comment, accusing him of playing politics without reaching out to Minneapolis city officials before releasing their proposals.

"It was stated just a moment ago by Rep. Daudt that he was just looking for a sound bite on the media, and I think that is exactly the case," Frey said.

The disagreement spilled into a hallway in the state Capitol basement, where Frey and state Rep. Matt Grossell, R-Clearbrook, accused each other of lying.

Some Republican lawmakers said they do not ride Metro Transit or allow their families to do so because of a perception of crime. FOX 9 has detailed the rising violence at light rail stations, and deadly shooting this month on a bus in downtown Minneapolis has further raised concerns.

State Rep. Jon Koznick, R-Lakeville, said a grandfather in his legislative district recently told him about a horror story on a light rail car.

"There was an argument that almost resulted in a major fight, and he was very disturbed that he put his granddaughter in harm's way," Koznick said. ""Until things change, I won’t be taking my family and my daughters on the transit system."

But when a reporter asked whether Frey believed everything was OK in Minneapolis, Frey said, "No. Not at all. Public safety needs to be a top priority."

The GOP proposals would stiffen penalties against gang members who possess a gun during a crime, lawmakers said. Daudt said his members would seek at least $1 million extra for the Bureau of Criminal Apprehension to pursue more drug trafficking crimes.

Ten other Republican lawmakers flanked Daudt at the news conference to highlight the policy proposals. Lt. Bob Kroll, president of the Minneapolis police union, stood with them and said he supported the effort.

"There’s a reason that the police chiefs in both Minneapolis and St. Paul have asked for additional resources and additional officers," Kroll said. "When they’re running 911 call to 911 call, it’s a Band-Aid approach."