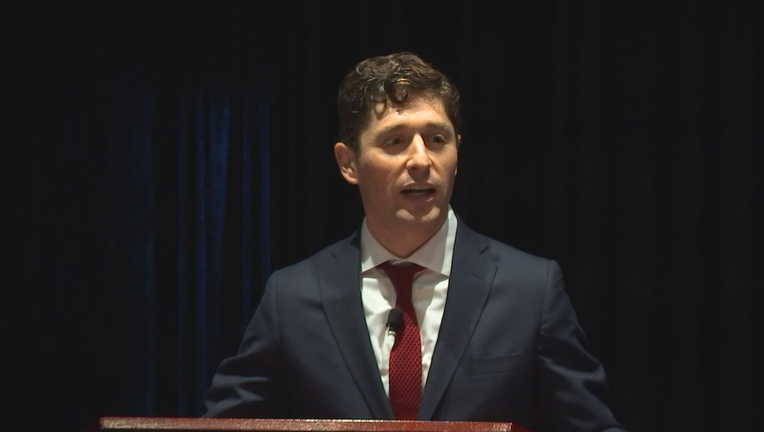 MINNEAPOLIS (FOX 9) - Minneapolis Police will add a third recruit class in 2020 under a budget deal struck by Mayor Jacob Frey and the city council, ending a standoff over police spending.

The $2.3 million deal approved by the council's budget committee Friday delivers Frey a partial win. The first-term mayor initially called for 14 new officers to deal with staffing shortages and an inability to respond to thousands of highest-priority 911 calls. But the plan, announced this summer, fell flat with some council members who oppose additional police staffing.

Minneapolis Police will add a third recruit class in 2020 under a budget deal struck by Mayor Jacob Frey and the city council, ending a standoff over police spending.

The extra recruit class will likely be larger than the mayor's initial 14-officer proposal, Frey's office said. In exchange, skeptical council members will get modest reductions elsewhere in MPD's budget and additional funding for the city's Office of Violence Prevention.

"We worked extensively, whether by phone or in the office chalking up numbers on the whiteboard, to arrive at a solution -- indeed a compromise for everyone -- that was a truly balanced approach to public safety," Frey told reporters after the vote.

The budget deal does not raise the limit on sworn strength in Minneapolis, currently set at 888 positions, as Frey's initial plan would have. It will leave Minneapolis below some other peer cities, a FOX 9 analysis has shown.

But the extra recruit class will allow MPD to more easily reach that 888-officer figure, which is rarely met now because of attrition.

The full council still needs to approve the 2020 budget later this month before it takes effect. A final public hearing is scheduled for Wednesday.

Council Member Steve Fletcher, a main opponent of Frey's 14-officer proposal, was among the supporters of Friday's deal. Adding a recruit class will address a "broken" police staffing model, he said.

"The way we plan for staff is really confusing to people. We can talk about adding 14 (officers) but if we’re down 40, are we really adding 14 officers?" Fletcher said. "This is something that precedes this chief and this mayor. It’s been this way for decades."

Council President Lisa Bender, who was critical of Frey's initial proposal, said she would support the new recruit class to "help close the staffing gap problem in the department leading to expensive overtime costs, and because it is part of a package adding $500,000 for reform and prevention."

Council Member Linea Palmisano, who backed the mayor's summertime plan, said she didn't like everything about Friday's deal but would support it.

The alliance between Frey and the council leaves anti-police activists on the outside. When the mayor and council members stepped to the podium to announce Friday's deal, protesters blocked them with giant, lip-shaped balloons and accused city leaders of giving them lip service.

One protester poured a backpack full of pennies onto the ground in front of Frey. Activists chanted that city residents were getting pennies while police were getting "gold."

"We’re very disappointed," said Kandice Montgomery of the group Reclaim the Block. "We’re glad the council did something, but it’s not enough."

The police staffing debate has dominated the conversation over the 2020 budget, but other areas also got attention Friday.

Council members added a requirement forcing the Minneapolis Public Housing Authority to install fire sprinklers or other suppression in its high-rise apartment buildings before getting city money for new construction.

Last week, a fire in a MPHA-owned apartment tower in the Cedar-Riverside neighborhood killed five people.

Minneapolis Fire investigators ruled the blaze as accidental. The building at 630 Cedar Ave. South does not have sprinklers, a fire department spokesman said.

"We might not have had the tragedy that we had (if there were sprinklers)," Warsame said.