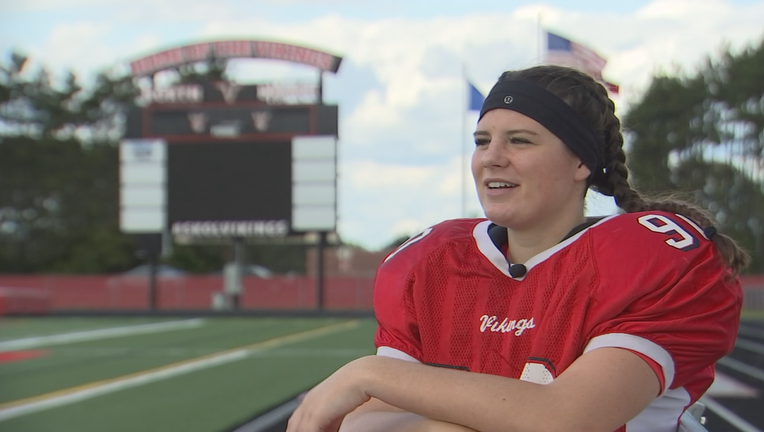 Emma Mohs was recruited from North Branch High School's soccer team to be the kicker on the football team. (FOX 9 Minneapolis-St. Paul)

NORTH BRANCH, Minn. (FOX 9) - As Minnesota Vikings fans know, a reliable kicker can be tough to find. It’s the same story at every level of the game, including high school.

The North Branch Vikings have little time to waste at their weekly special teams practices because their kicker can’t stay long. She has to get out of her shoulder pads and helmet and into the goal for the varsity girls’ soccer team.

As Minnesota Vikings fans know, a reliable kicker can be tough to find. It’s the same story at every level of the game, including high school.

“It's definitely something I will be telling my kids and grandkids and so on,” said Emma Mohs, the kicker for North Branch High.

Mohs’ story of her senior season is sure to live on in family lore. Mohs, who can blast soccer balls with the best of them, was asked by football coaches to try out for the open kicker position in a sport she had never played and knew next to nothing about. 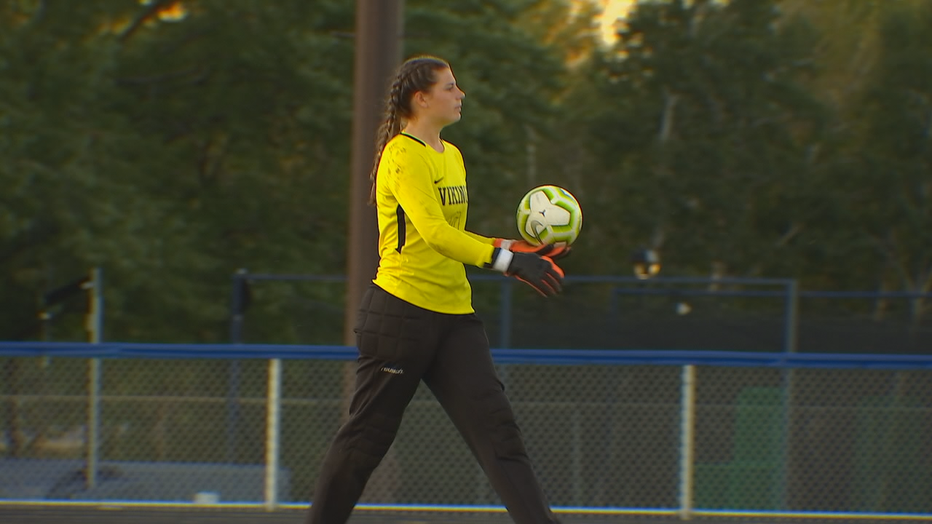 Emma Mohs is in her senior season as a goalie for the soccer team at North Branch High School. (FOX 9 Minneapolis-St. Paul)

“I didn’t practice ever,” said Mohs. “Never, ever. That was my first time booting for real and it was really cool.”

Turns out – she is a natural. Mohs earned the spot over several teammates with a strong and accurate leg.

She’s already converted an extra point in game action and is relied upon to place her kickoffs in just the right spot where her teammates can pounce.

“She is so versatile,” said North Branch Head Football Coach Justin Voss. “She can kick it deep. Put it there, here. I mean, just perfect. I think if I put out a cardboard box, she’d hit it. She’s so accurate.”

“I kick it from right here, inside laces, like I would do in soccer,” said Mohs.

Mohs spends about 45 minutes with her football team every Wednesday, honing her skills before dashing off to play her first love, soccer. She then returns under the bright lights of Friday night.

“Probably the only challenge is that whenever it’s my turn, it’s all eyes on me for kickoffs, extra points, or whatever the case may be, so maybe just the pressure,” said Mohs.

There is no telling where this Vikings’ season is headed, but Mohs and her supporters are certainly hoping her presence out on the gridiron might inspire others.

“My biggest hope is there are other girls that’ll see her doing that and go try something new,” said Stephanie Mohs, Emma’s mother. “Maybe it’s about inspiring someone who needs some inspiration. We’re hoping somebody will watch it and say, ‘Hey I can do it too.’”

“All the girls on social media and in school and the teachers, all these girls are talking to me, saying,  'you are amazing, you’re my idol. I want to do this now because you’re doing something with all these boys.' It’s really special just because I’m very big-hearted, and I really take it to heart.”