ST. PAUL, Minn. (FOX 9) - Thomas Harrigan’s mother and father, Sandy and John, are still reeling more than two years after the murder of their son inside his Saint Paul home on Ivy Avenue.

"Actually, the worst thing is I lost my faith in God," Sandy said during her victim impact statement in Ramsey County District Court.

"And still even after all this time, something happens almost every day to trigger a thought that makes me want to weep, or to scream or both," John said.

On Thursday, the alleged gunman’s brother Dontay Caraway, who admitted he was at firefighter Tom Harrigan's house when the shooting unfolded, avoided prison time when he agreed to a plea deal on a manslaughter charge that calls for a three-year probation period. The man authorities believe pulled the trigger, Blake Caraway, was also recently acquitted of murder by a jury.

Tom’s mission in life was to help others in pain. He was a Saint Paul Fire Department paramedic and earned a bronze star serving his country. His deployments as a front-line combat medic took him to Iraq and Afghanistan.

In court, his family played a short video clip of Tom teaching a medical procedure to fellow soldiers. Sadly, his parents believe his service overseas came at a cost of post-traumatic stress and addiction, eventually leading to his murder. Tom was shot to death in September 2019.

"I believe my son’s murder is a reflection of things that are wrong with our country," Sandy said. 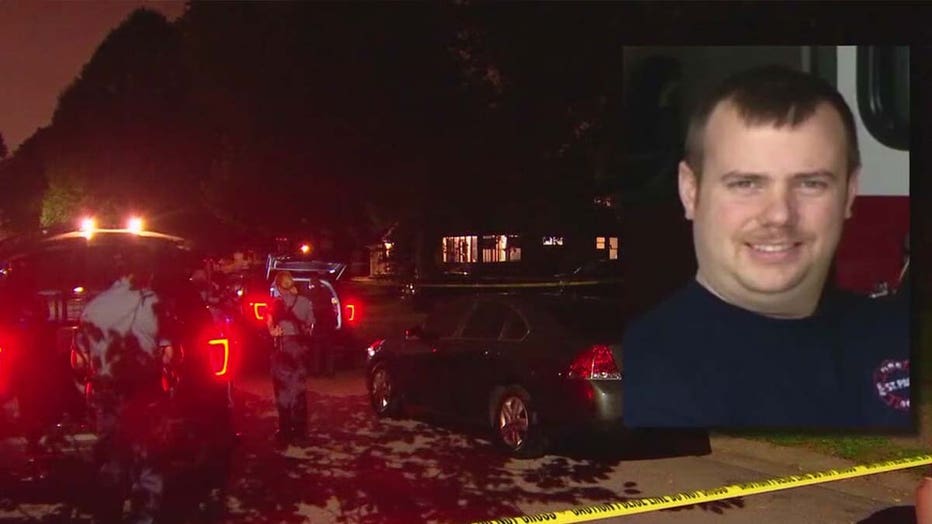 Tom Harrigan, a St. Paul firefighter and veteran, was shot to death in September 2019. One man who pleaded guilty to manslaughter on Thursday will not serve time in prison. (FOX 9)

"It is galling to me to think this defendant might walk out of this court today without any additional time spent in custody," John said.

John believes the justice system let his family down. The man authorities believe pulled the trigger, Blake Caraway, was recently acquitted of murder by a jury.

"My son was robbed of his life. I’ve been robbed of a son," John said.

On Thursday, the alleged gunman’s brother Dontay Caraway, who admitted he was at Tom’s house when the shooting unfolded, also avoided prison time when he agreed to a plea deal on a manslaughter charge that calls for a three-year probation period.

"My condolence goes out to the family, and I apologize for all the pain and hurt they’ve been through," said Dontay, who pleaded guilty to second-degree manslaughter.

The judge telling the 41-year old if he messes up, he’ll be looking at 67 months behind bars.

"This was a case where a person has admitted in court that he participated in a murder," John said. "To let him go free with no prison time is a horrible message to send out to a community wracked by senseless violence for the last three years."

Dontay walked out of the courthouse on Thursday morning. He will remain on probation with a 5.5-year prison sentence hanging over his head should he run afoul of the law and squander this opportunity.