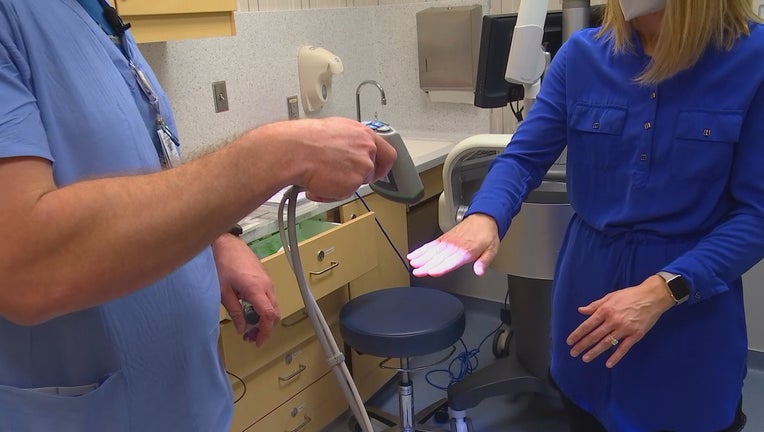 MINNEAPOLIS (FOX 9) - Doctors in Minneapolis are thankful for a new tool allowing them to care for severe frostbite patients more quickly than ever before.

As of about noon Friday, Hennepin Healthcare had treated 33 patients with frostbite since the extreme cold snap began a week ago.

Doctors in Minneapolis are thankful for a new tool allowing them to care for severe frostbite patients more quickly than ever before.

Dr. Tom Masters said the new device is a "game changer" for treatment.

"There are a lot of these around the country that are being used in the operating room," said Dr. Tom Masters of Hennepin Healthcare. "We are definitely the first in the Minnesota - might be the first in the United States - to be using this in an acute setting."

Until just a few weeks ago, doctors would use a type of bone scan to gauge blood flow in extremities, but that process can take hours.

Now, Dr. Masters can use a handheld scanner. An infrared dye administered to the patient through an IV attaches to blood proteins, so then a special camera can see all the tissue where blood isn’t flowing as it should.

"It’s way faster, doesn’t involve any radiation, it doesn’t get processed through the kidney, so it’s safe for any patients with kidney injury and it allows us to do the study five minutes after patient arrives in the emergency department," said Dr. Masters.

"Also it allows us to know the patients that are doing OK and avoid giving some medications that may have some side effects," he added. "It’s been nice in both methods there."

Currently being used on a trial basis, the new tool allowed for a man suffering frostbite to get clot-busting medication and into one of the hyperbaric chambers much more quickly.

In the long-term, staff hope use of the new device can reduce the need for amputating affected toes or fingers.

"'Time is tissue' is a saying that you’ve heard doctors throw around," said Dr. Masters. "So the sooner we can get patients medication they need to help, the better hope we have that they’ll have more preserved tissue."

Signs of frostbite include: