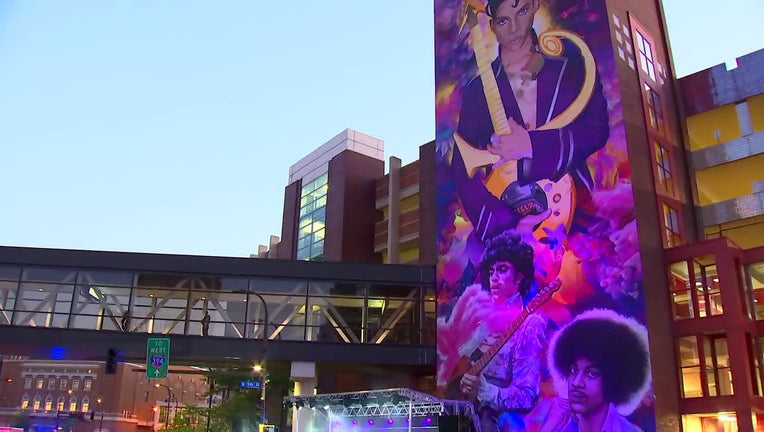 Organizers bathed the new, finished Prince mural on Ramp A across from First Avenue in Minneapolis in purple light on Thursday. (FOX 9)

MINNEAPOLIS (FOX 9) - Crews have put the final touches on a 100-foot-tall mural for Prince painted on the side of Ramp A in Minneapolis that will honor the beloved musician from Minnesota.

The gigantic mural will be dedicated Thursday night during a block party along First Avenue near Ramp A. Work on the mural has been ongoing in recent weeks, with the artwork headed up by muralist Hiero Veiga. The mural is a result of seven years of effort by organizers Sharon Smith-Akinsanya and Joan Vorderbruggen and thanks to sponsors including U.S. Bank, the Minnesota Twins, Target, and Best Buy.

The mural features Prince and three different stages in his career. The painting on the bottom right section of the mural draws from a photograph in 1977, before Prince had released his first album, taken by photographer Robert Whitman. The bottom-left painting shows Prince at a concert in Los Angeles in 1985, as documented by Michael Ochs. The main painting shows Prince in 2009 at Paisley Park in Chanhassen, pulling from a photo by Afshin Shahidi.

The dedication on Thursday comes a week before that section of 1st Avenue will be renamed in Prince's honor. Prince is already immortalized with a on the side of the music venue First Avenue, just across the way from the mural.

Prince mural: Organizers talk about the long road to getting the mural painted

The gigantic mural of Prince in Minneapolis saw its final touches on Thursday.