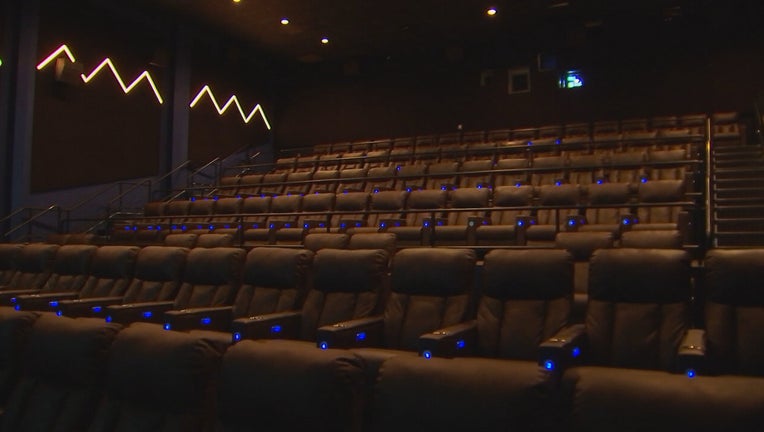 Seats have been empty for most of the year at movie theaters due to the pandemic. (FOX 9)

(FOX 9) - Like music venues and other performance centers, movie theaters have been among the hardest-hit industries during the pandemic.

With worries of large-scale COVID-19 spread, theaters have been shut down and under restricted capacity for most of the year. But while things have been bleak, many in the industry say better days are ahead.

Like music venues and other performance centers, movie theaters have been among the hardest-hit industries during the pandemic.

Since the pandemic started, business at the Emagine movie theater at Willow Creek is down about 90 percent from where it was a year ago.

"The pandemic has hit all theaters very hard," said Jake Mueller with Emagine Theaters. "There's a lot of our competitors who have gone under and won't be returning and it's sad to see that."

Northwoods Entertainment, which operates nine Emagine movie theaters around the Twin Cities, was one of 73 theater owners across the state who received $8.5 million in grants from the Minnesota Department of Employment and Economic Development.

Theater owners received anywhere from $10,000 to over $1 million to help them stay afloat at a time when COVID-19 safety protocols have either closed or restricted theater capacity to just 25 percent.

"Without the grant and the assistance from the federal and state government, no theater would be able to survive," said Mueller.

With many studios pushing their movies back until after the pandemic and others moving their films to streaming services like HBO Max and Disney+, some wonder if this is the end of the movie theater as we know it.

But Mueller, the Director of Operations for Emagine Theaters in Minnesota, believes there will be pent up demand to see movies on the big screen with other people once we're in the clear from COVID-19.

"The tunnel has gotten longer and longer but the light at the end of that tunnel has gotten brighter and brighter," he said. "We're very excited for our fall lineup and if all of those films stay in place. This should be one of the best fall and winter seasons we've ever seen."

After all, movies offer an escape from the harsh realities of everyday life and some theater owners say when have people needed to get away from it all more than now.

"The future of the movie business is bright. We just have to get there," Mueller added.