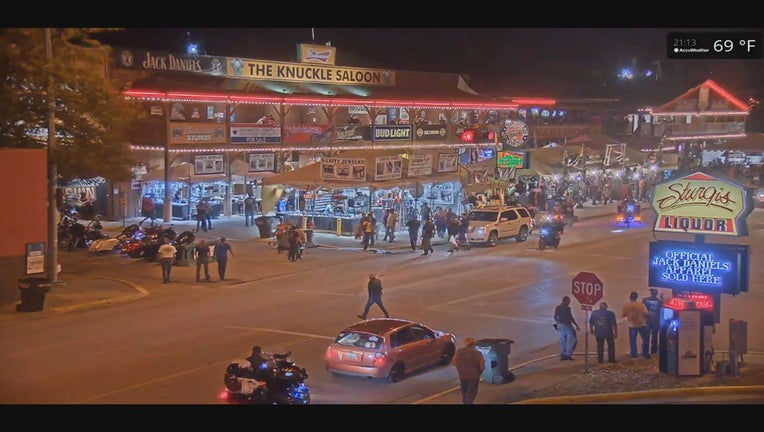 The city of 7,000 people is expecting around 300,000 to roll through this weekend as the 10-day festival kicks off. It's a smaller crowd expected than the approximately 500,000 bikers that showed up last year, but the event still a focal point for health experts worried about the spread of coronavirus.

Saturday marked Day Two of the rally and there are no signs that things are slowing down.

"It doesn’t seem like it is any different than last year or the year before that," said motorcyclist Larry Kennelly who made a trip from Minnesota to the rally.

Rally organizers tell us so far, numbers only seem to be down about 20 percent compared to last year. Minnesotans on the ground there now say they’re taking precautions.

"I think a lot of the places like restaurants... there’s a lot of tents out in parking lots that I’ve talked to servers," said Minnesota biker Mary Smith. "They’re trying to do as much as they can outdoors, kind of like what we’re doing in Minnesota."

Many groups riding together tell us they’ve been with each other throughout the pandemic.

"We’ve been together, all winter through COVID," said Smith. "We’re a tight-knit group of friends, basically a family and so I think that’s true with most motorcycle groups."

But health officials still have their concerns. The Minnesota Department of Health has been warning bikers from going to Sturgis, even encouraging those who attend to voluntarily isolate for 14 days when they come back.

"We have big problems in Minnesota and in the United States with community transmission," said Minnesota Health Commissioner Jan Malcolm. "And the idea of bringing together tens and hundreds of thousands of people from all around the country in close contact for days at a time does raise significant concerns for us."

Others say they’re making sure not to go inside crowded bars and restaurants.

"It’s not something we’re taking lightly, we’re doing things that are outdoor activities so we’re not going into bars or things like that," said Minnesota motorcyclist Jason Bull.

The bikers point out Sturgis is all about being outside and enjoying the ride.

"Motorcycling is social distancing at 70 miles an hour," Smith said.

The total coronavirus cases are low but rising in South Dakota. The state reported 106 new cases on Saturday, bringing the total to more than 9,400 confirmed cases.

Statewide, 146 people have died from COVID-19. Since the pandemic was declared, 119,000 people have been tested in South Dakota, compared to more than 1 million in Minnesota.