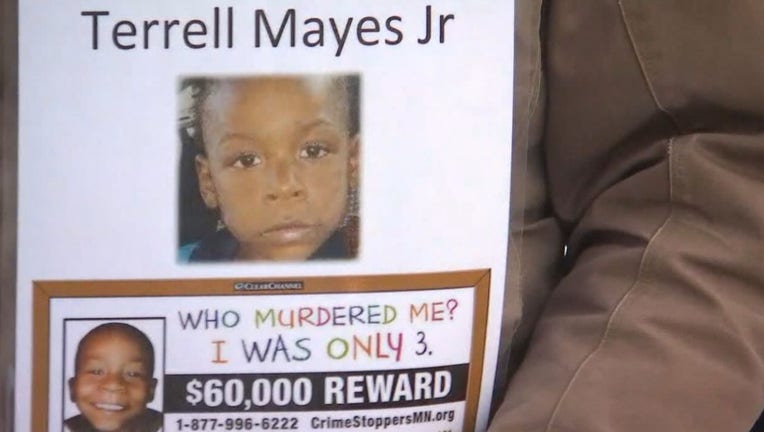 A poster of Terrell Mayes offering a reward for information about the shooting that killed him on Dec. 26, 2011.

MINNEAPOLIS (FOX 9) - It’s been nearly a decade since Marsha Mayes lost her son.

Terrell Mayes, Jr., 3, was shot and killed by a stray bullet while running up the stairs of his Colfax Avenue North home the day after Christmas.

Terrell Mayes, Jr., 3, was shot and killed by a stray bullet while running up the stairs of his Colfax Avenue North home the day after Christmas.

As the Twin Cities quickly learned, Terrell and his three siblings were following what their mother had trained them to do: run to a safe place in a closet on the second floor whenever shots rang out in the neighborhood.

After Terrell's killing, Mayes quickly moved her surviving children out of north Minneapolis, put them into counseling and has become an advocate against gun violence. At the same time, a $60,000 reward has gone untouched as her son’s killer is yet to be found.

Now with two other young gunshot victims in the hospital and six-year-old Aniya Allen killed, Mayes is one of many mothers in a constant state of worry for her youngest son Marrell, who is now 11 years old.

Mayes says she drove behind his bus this week just to make sure he made it safely to school.

"Because I’m so scared one of those bullets," she said.

Even when the family is smiling, without Terrell there’s forever a piece of their hearts missing.

Mayes begs anyone with information about her son’s case or any of the unsolved shooting cases since to call police. She says it’s never too late to give families closure.