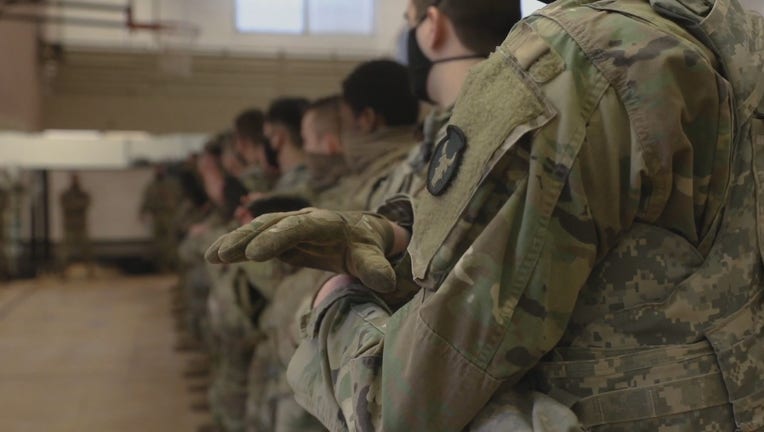 (FOX 9) - Around 25,000 guard members from all 50 states and territories have been called to Washington D.C. this week to help ensure the peaceful transfer of power on Inauguration Day Wednesday.

"It’s an important part of our nation’s history to see the peaceful transfer of power and for us to be a part of that out here it’s exciting, it’s humbling and it’s a huge honor," Wing Command Chief for the 133rd Air National Guard Base, Mark Legvold, said.

More than 700 Minnesota National Guard members in D.C. for inauguration

Around 25,000 guard members from all 50 states and territories have been called to Washington D.C. this week to help ensure the peaceful transfer of power on Inauguration Day Wednesday.

Chief Legvold has been with the Minnesota National Guard for 25 years. This is the first time he’s been called to D.C. to help with Inauguration Day. In the past, the Minnesota Guard has helped with security at inauguration events, but Chief Legvold says, he’s never seen a response this big.

"To be called out for support of Inauguration, this is an abnormal amount. It’s not abnormal for us to do this job. The national guard networks with civil authorities and trains with our civilian counterparts but the scale of this is so much larger than we’ve experienced," Chief Legvold said.

Chief Legvold says the planning for this event happened quickly after riots at the United States Capitol on Jan. 6. He says, fortunately, guard members are used to rapid changes during their missions. What’s unique about their time in D.C. is they’ll be working with guard members from other states as they take orders from D.C. police.

He can’t say exactly what their mission is. But, the Minnesota National Guard trains for events with large amounts of people. They also train specifically to "keep the peace" at protest events. During unrest in Minneapolis last summer they gained real-world experience with handling big, unpredictable crowds.

"We’re all learning from each other in this process so this is a good opportunity to share some of these experiences so we can apply them as a peacekeeping operation here in D.C.," Chief Legvold said.

The Minnesota National Guard also helped administer COVID-19 tests at sites across the state last spring. They continue to be involved with missions related to the pandemic.

"To have this much domestic operation mission accomplishment during the course of a year it’s a lot and we’re asking a lot of our guards men and women and they keep on performing," Chief Legvold said.

Now Legvold’s focus is on the inauguration event on Wednesday. Even with all of this planning ahead of time, they’re not sure when they’ll return home.

"Right now the mission is evolving and we’re just kind of keeping that open-ended until we know how the city is going to continue to use us or when they are able to release us," Chief Legvold said.

Chief Legvold says the 728 Minnesota National Guard members in D.C. this week arrived via the 133rd airlift wing which is celebrating its 100th year in operation.