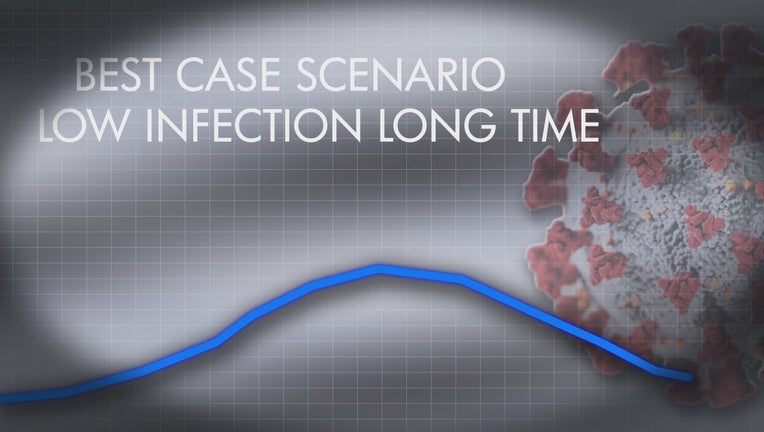 The best case scenarios usually involve a low infection rate over a longer period of time, or “flattening the curve,” as health officials have said. (FOX 9)

ST. PAUL, Minn. (FOX 9) - What does the future hold for Minnesota with the spread of the coronavirus?

State health officials said Friday they’ve been working with infectious disease experts at the University of Minnesota to develop a model predicting the spread of coronavirus. One problem: Not enough data.

Model for COVID-19 spread in Twin Cities? Not enough data, yet

What does the future hold for Minnesota with the spread of the coronavirus?&nbsp;

"The model doesn’t exist yet; it's being built," said Jan Malcom, Commissioner of the Minnesota Department of Health.  "With 115 cases (as of Friday) and a few hospitalizations, we don’t have enough information now to get it into a model."

Governor Walz said the lack of data is directly related to the lack of early surveillance testing.

“The lack of testing hindered us to get the information for that modeling,” said Walz at a Friday press conference.

Governor Walz said he expected a preliminary model from state health officials as early as this weekend.

Epidemiologists around the world are running the numbers in computer models trying to predict the global spread of coronavirus, and it can be tricky.

Each model contains built-in assumptions like its reproduction rate, the incubation period, and rates of hospitalization which can vary dramatically from country to country.

But there have been some common themes. The best case scenarios usually involve a low infection rate over a longer period of time, or “flattening the curve,” as health officials have said so often.

The worst case scenarios, on the other hand, usually involve a very a high infection rate over a short time period that would overwhelm hospitals and lead to a higher death toll.

In California, where 19 people have died for COVID-19 and another 1,000 have tested positive for the novel coronavirus, Governor Gavin Newsom issued a “Stay at Home” order and offered a dire prediction:  a 56% infection rate, meaning 25.5 million people, over just eight weeks.

Governor Newsom declined to say which model that prediction came from.

Researchers from the Harvard Global Health Institute developed a model for major cities in the United States based on a range of infection rates (20 to 60%) and length of time (six to 18 months). The model assumes an 8 percent hospitalization rate with an average stay of 12 days.

Details of that model for the Twin Cities metropolitan area were reported by the nonprofit news group ProPublica.

The Twin Cities metropolitan region has 3.4 million people, with 14 percent of the population over the age of 65.

The model looked at a moderate outbreak scenario: A 40 percent infection rate over the next 12 months.

The model predicted there be 214,000 patients for an average of 6,950 hospital beds, and 610 intensive care unit (ICU) beds. At any given time, on average, 65 percent of those beds are already occupied with patients.

The model predicted the Twin Cities would need three times as many hospital beds and six times the number of ICU beds.

The model did not predict the need for ventilators, which help the most critically ill breathe.

In the last couple weeks, MDH has declined to provide a precise number of ventilators available at hospitals, but a recent survey and data provided by the American Hospital Association, places the number of mechanical hospital ventilators between 350 and 400.

It’s been estimated as many as 5 percent of those hospitalized with COVID-19 would require a ventilator to breathe. A plan developed by MDH two years ago, details criteria doctors could use to determine who should get a ventilator, and who would not, based on the prognosis for recovery.