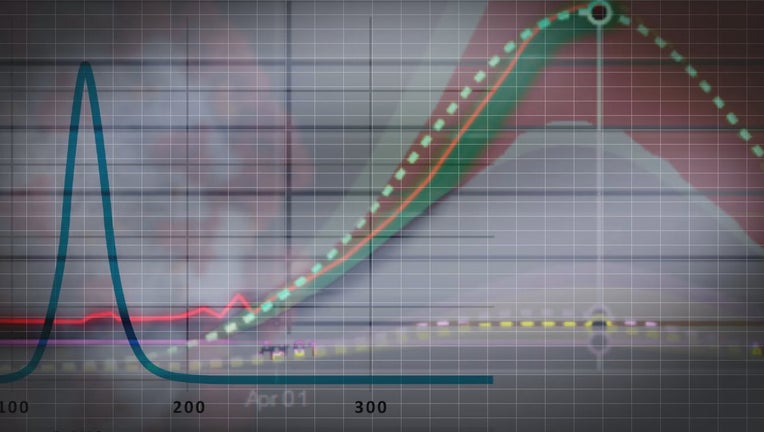 Developing a definitive model for COVID-19 is a difficult task. (FOX 9)

MINNEAPOLIS (FOX 9) - There is no COVID-19 crystal ball, so health officials and the public alike are eager to learn about mathematical projections of how the virus will spread. But the predictions can vary dramatically, because models are not magic.

“It’s hard when what you want is the certainty of a high school math test, but that’s not what we have,” said Maggie Koerth, a science journalist based in Minneapolis.

Model behavior: Estimates of COVID-19 spread ‘all over the place’

Koerth details the technical difficulties in developing a COVID-19 model in a story called “Why It’s So Fricking Hard To Make A Good Covid-19 Model” for the statistical web site FiveThirtyEight.

She said it is called a ‘novel’ virus for a reason. This is all new.

“None of these models is the right model. They’re all going to be different,” said Koerth. “You’re not waiting for one model to prove the other wrong, they’re just offering a range of possible outcomes.”

The problem, as Koerth explains, is that every model is based on assumptions, that are based on other assumptions and variables, which rely on incomplete data from other counties or other cities in the U.S.

Koerth said there is no standard “top down” reporting of epidemiological data in the U.S., so it is difficult to “compare apples to apples.”

In Minnesota, a model developed by the Minnesota Health Department (MDH) and the University of Minnesota School of Public Health, predicted that with mitigation efforts, like a stay-at-home order and social distancing, the pandemic in Minnesota would peak in June with two million people infected, and tens of thousands could die.

MDH said this model has state specific demographic and health data. Health Commissioner Jan Malcolm said the model was initially run ten days ago, and they plan on re-running the model soon with updated data.

A separate model, developed by the Institute for Health Metrics and Evaluation (IHME) at the University of Washington, indicated the pandemic would peak sooner in Minnesota, but would be less severe.

The IHME model predicted the peak in Minnesota would arrive in April, killing slightly more than a thousand people.  That model relied on mortality data and is being updated daily.

A model from the Harvard Global Health Institute laid out multiple scenarios for the Twin Cities based on the percentage of the community infected, predicting that a moderate outbreak with 40 percent infected over 12 months would mean 214,000 patients, overwhelming the health care system.

One of the earliest and most models for the U.S. was from London’s Imperial College, and predicted if the U.S. did nothing, 81 percent would become infected and 2.2 million would die. With mitigation effects, there would be half the number of deaths, according to the model.

At its most simplistic, the formula for such a model could fit on a napkin: infection rate x fatality rate x susceptible population = the number who will die.

The reality is a much bigger, more complicated data set, with some relatively unknown or hard to predict variables.

The biggest obstacle for any model may be the moving target of an infection rate, which is largely unknown in the U.S. because there has been so little surveillance testing.

Even a fatality rate is not a straightforward figure, but can vary dramatically by age, health conditions, and available hospital capacity. There are, in fact, multiple fatality rates in a given population.

There is also the symptomaticity ratio, which is how many of those who test positive for COVID-19 are displaying symptoms and how many are asymptomatic. That number is key to understanding “asymptomatic spreaders” and “super spreader events.”

It is also unknown how many of those who recover from COVID-19 will have immunity, or how long they will be contagious.

Koerth said here are still questions about the virus itself: How long can it survive on a surface? How far can it travel in the air?

Finally, all the models are now considering various mitigation efforts, like a stay-at-home order, that are highly dependent on human behavior, which can change over time.

“One thing you can take away is this is a moving target and you’re not going to get a clear answer,” said Koerth, who said each model is simply providing a range and trajectory.

But she understands there is a strong psychological need for answers, from the public and policy makers, and the science is still not exact.

“It’s asking people to be at ease with the unknown, with some scary stuff, but that’s about the best that’s available right now.”