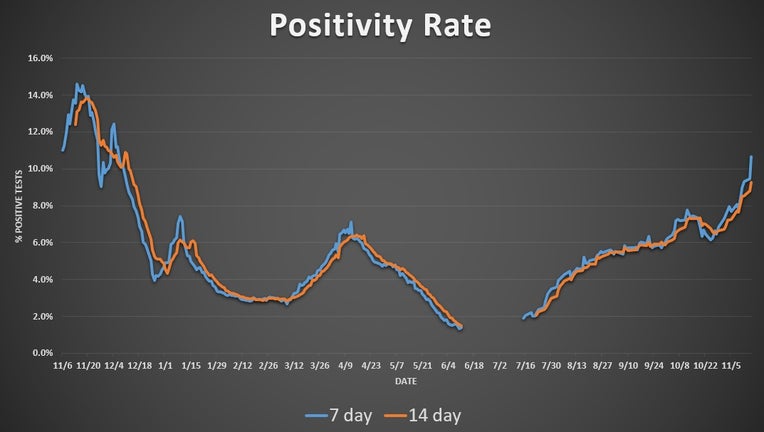 Minnesota's seven-day positivity rate is above the 10% threshold for the first time since early December 2020, the latest MDH data shows.  (FOX 9)

The state's seven-day positivity rate is above the worrisome 10% threshold for the first time since early December 2020. Because hospitalizations lag cases, the spike will push Minnesota's already-strained hospital staffing further. As of Tuesday, 1,348 people were hospitalized with the virus, the highest number this year.

COVID-19 cases are surging in Minnesota ahead of Thanksgiving

COVID-19 cases are surging in Minnesota ahead of Thanksgiving.

Gov. Tim Walz is in Europe on a trade mission. The governor's office has not made him available to reporters since leaving on the trip this weekend. Speaking to reporters on Friday before leaving for Europe, Walz predicted that the current outbreak would "prove the worst of the surges" so far during the pandemic.

On Monday, Minnesota became the nation's worst COVID hotspot, according to Centers for Disease Control and Prevention data. Northern states are dealing with surges now, flipping the map since southern states dealt with outbreaks this summer.