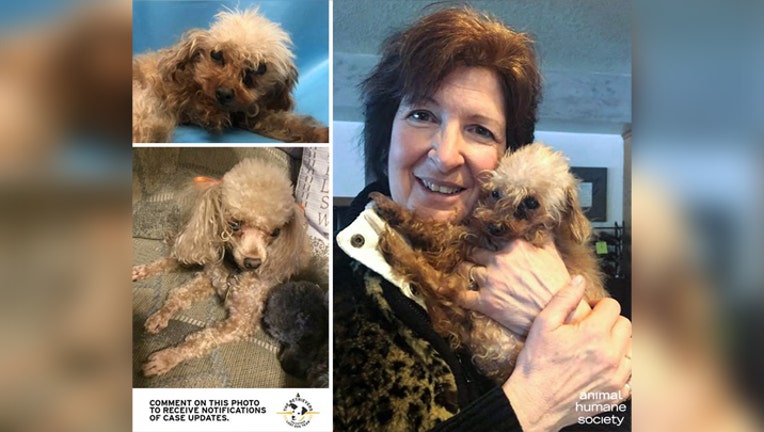 Karen was reunited with her dog after she went missing for more than 17 months!

(FOX 9) - One Minnesota woman is elated after she’s reunited with her dog who was missing for 17 months.

According to the Animal Humane Society of Minnesota, Zoey the Toy Poodle escaped from her yard in White Bear Lake in August 2018. Her owner, Karen Kissner, made thousands of missing signs and contacted The Retrievers, a group that helps find lost dogs.

Earlier this month, a man says he found Zoey in Hinckey, Minnesota, nearly 70 miles away from Zoey’s home in White Bear Lake. Zoey was taken to the Woodbury Humane Society where an employee recognized her from one of The Retrievers’ posters.

“I can’t even explain. It’s a relief that I finally have her, and oh my God she’s home. She’s finally home,” owner Kissner said.

Kissner says when she was finally reunited with Zoey, Zoey’s hair was matted, she was emaciated and scared.

During the 17 months Zoey was missing, together, Kissner and The Retreivers followed up on sightings of Zoey and continued sharing her picture and her story wherever they thought she might be. At one point there was a report that Zoey had been running down I-35 south when a pick-up truck pulled over and picked her up. Kissner believes that person was a breeder who thought Zoey might be a puppy.

The reason Kissner thinks a breeder had her is that she says when Zoey was found Kissner learned someone had implanted a microchip into Zoey. That microchip was never programed to correspond with an address, but the Humane Society was able to determine the chip was purchased 22 years ago, in bulk. Kissner was told breeders typically buy microchips in bulk. Zoey also had some physical changes suggesting someone might have tried to impregnate her through artificial insemination.

“They handed her to me and she snuggled right into my neck, and she doesn’t want me out of her sight,” Kissner said.

Kissner says Zoey has been exhausted since she’s been home and has mostly been eating and sleeping. She has an ear infection but no other visible injuries.

“I knew in my heart I was going to keep searching until I found her. She needed me just as much as I needed her, and I wasn’t going to give up,” Kissner said.

Kissner says she is extremely grateful to everyone who helped look for Zoey and prayed for her safe return home. She sends her gratitude to the person who found her and to the person at the Humane Society who remembered Zoey from her missing poster and helped Kissner finally bring her home.