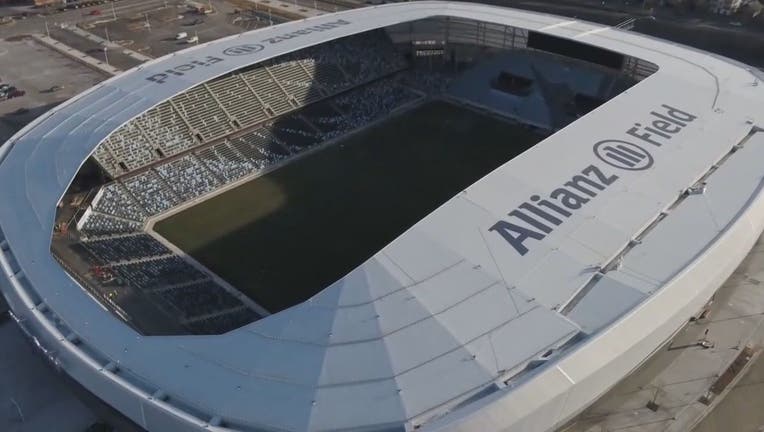 The crew of about 35 technicians, who work the cameras for the Jumbotron, are seeking to be represented by the International Alliance of Theatrical Stage Employees (IATSE), Local 745. Team management can now either recognize the union and begin negotiating a contract or choose to oppose the unionization effort, in which case the employees will file a petition with the National Labor Relations Board (NLRB) seeking an election.

Nick Quinn, a camera operator, who has been working for the Loons for seven years, says they are hoping for better wages, safer working conditions and game day parking.

"We hope the team will voluntarily recognize our union because it's the right thing to do. The stadium was built by unionized workers. You get to the game on union-run buses. Why should we not be unionized?" he told FOX 9.

According to Quinn, the road that led to the current union drive began in late 2020, when the Minnesota Department of Revenue ruled the team could no longer classify the technicians as independent contractors, which had been their practice, and instead had to bring them on as part-time staff.

This was a step-up for the crew — they now were covered by workers' compensation and the team was now paying a part of their payroll tax — but they had hoped the team would also give them a raise, as they had not seen any increase in wages since the Loons joined Major League Soccer in 2017.

Quinn said he organized other camera operators, and as a group, they sent the team a counter offer on Dec. 20, 2021, which the team rejected on Jan. 20. Seeing no other recourse, the employees started talking to IATSE.

"We started organizing, getting cards signed with people, and now we have the overwhelming majority of the cards signed. People want the union, they want these improvements. We're just hoping the team will do the right thing and recognize the union," Quinn said.

The crew’s safety concerns center around heavy boxes containing a camera, a tripod and other equipment that they carry up and down the steep concrete steps in Allianz Field before and after every game.

"After that game, they can be covered in garbage, beer and food. It can be slippery. It's not safe to bring that stuff up and down, and it's not good for our backs to do that," Quinn said.

He said they’ve asked the team to consider alternatives, like creating a climate-controlled locker to store the equipment so it doesn’t have to be carried up the steps, or building a lift.

The employees already have one important ally in their campaign: fans. The Wonderwall, which is the umbrella organization for the team’s main supporters groups — True North Elite, Dark Clouds and Red Loons, issued a statement Friday urging the team to recognize the union.

"The in-house broadcast crew members at Allianz Field work hard to support the team and its supporters and deserve to be compensated for their work with fair wages and benefits," the statement reads. "It is our strong hope that Minnesota United will voluntarily recognize its team members' union. We know everyone at the team agrees that the dignity of work should be honored."

Josiah Wollan, who has worked for the Loons as a camera operator, technical director and replay tech since the team joined the MLS in 2017, is among the employees pushing for a union. He says he has no plans to protest or picket the team, but he will be ready if it comes to it.

"We don't have anything planned at this time, but we'll do what we have to, we'll make our voices known. But we hope that the organization will be cooperative and approach this in good faith so that we don't have to use our freedom of speech," he said.

In a statement to FOX 9, the Minnesota United said:

"Some of our in-stadium video production employees are exploring the question of whether a union makes sense for them. Other members of this group are just learning of this possibility and want to know what it might mean for them and their families. We support our team members’ rights and will respect whatever choice they make. We are committed to being open, honest and transparent in discussing the pros and cons of unionization, respecting our values and our culture and remembering that we are friends and teammates who support one another."