On Friday, Minnesota hospitals and health officials agreed to share information about the number of ventilators throughout the state that could be used to treat critically ill patients having difficulty breathing.

(FOX 9) - On Friday, Minnesota hospitals and health officials agreed to share information about the number of ventilators throughout the state that could be used to treat critically ill patients having difficulty breathing.

Hospitals in the Twin Cities metro have an estimated 5,000 acute care beds, but only 550 intensive care unit (ICU) beds, and 450 ventilators, according to the Metro Health Preparedness Coalition.

Minnesota Department of Health Commissioner Jan Malcolm said at a press conference Friday they’ve asked hospitals to share the information to allow them to have “eyes on emerging challenges.”

“And we have talked about the importance of the strategic stockpiles to be source of personal protective equipment and equipment such as ventilators,” said Malcolm.

The Strategic National Stockpile (SNS) does not provide exact numbers of resources on hand for national security reasons, but according to one estimate it only has an inventory of 8,900 mechanical respirators.

In Italy, where there are more than 21,000 confirmed cases, there was a 20% growth in reported cases in a single day. Ventilators are reportedly in short supply as the death toll has risen to hundreds a day.  Doctors in Milan said they ran out of ventilators by Day 2 and were experiencing “Not a wave, a tsunami” of patients.

It mirrors a favorite metaphor of Minnesota’s Dr. Mike Osterholm, an internationally recognized expert in infectious diseases, who has been predicting something like the CoVid-19 epidemic for 30 years.

“I tell everyone it’s not getting ready for a Minneapolis blizzard, but for a coronavirus winter. And my guess is it’s going to be a long winter,” said Osterholm, during in an extended interview Thursday at his office at the University of Minnesota, where he’s director of the Center for Infectious Disease Research and Policy (CIDRAP).

Osterholm said he has been warning for years that hospitals, which have cut excess capacity to contain costs, have been left with too few resources during the normal flu season, “and we’re talking about adding on to that.”

“We’re going to have to find creative ways to protect health care workers and allocate resources the best we can,” said Osterholm.

For thirty years Dr. Mike Osterholm has been warning the public about the very real possibility of a deadly pandemic. COVID-19 has brought many of his dire predictions to reality. &nbsp;

Since March 9, FOX 9 has been asking the Minnesota Department of Health how many ventilators are available at hospitals in the Twin Cities metropolitan area.

MDH tracks information on hospital bed capacity and resources through MNTrac.  The information is collected voluntarily from hospitals through eight regional coalitions.

But the data collected is not considered public under Minnesota Data Practices.  An MDH spokesperson said hospitals had been unwilling to provide ventilator numbers because they consider the equipment expensive to maintain and regard specific information as proprietary.

On Friday, MDH was planning on asking hospitals to report aggregate data on a regional level, “under the circumstances,” said the spokesperson.

On Friday afternoon, the Minnesota Hospital Association confirmed that such a request had just been made.

“We are in a pandemic situation in Minnesota,” said Dr. Rahul Koranne, president and CEO of the Minnesota Hospital Association.   “So, everybody is willing to share information with the Department of Health.”

Dr. Koranne said there was no unwillingness on the part of hospitals to share the number of ventilators.  A spokesperson said the association does not consider it proprietary information and would provide the data when its available.

The key to understanding how fast CoVid-19 is spreading is its reproduction number, pronounced R-Nought (written as R0=). It is the average number of times a single infected person, whether symptomatic or not, will infect others.

The yearly flu has an R0=1.3, meaning on average, one other person will get sick.

In a leaked presentation to the American Hospital Association, one epidemiologist calculated that such a reproduction rate could translate into 96 million cases in the U.S., with 480,000 deaths, and 4.8 million hospital admissions.

“I don’t see anything keeping us from those numbers,” said Dr. Osterholm. 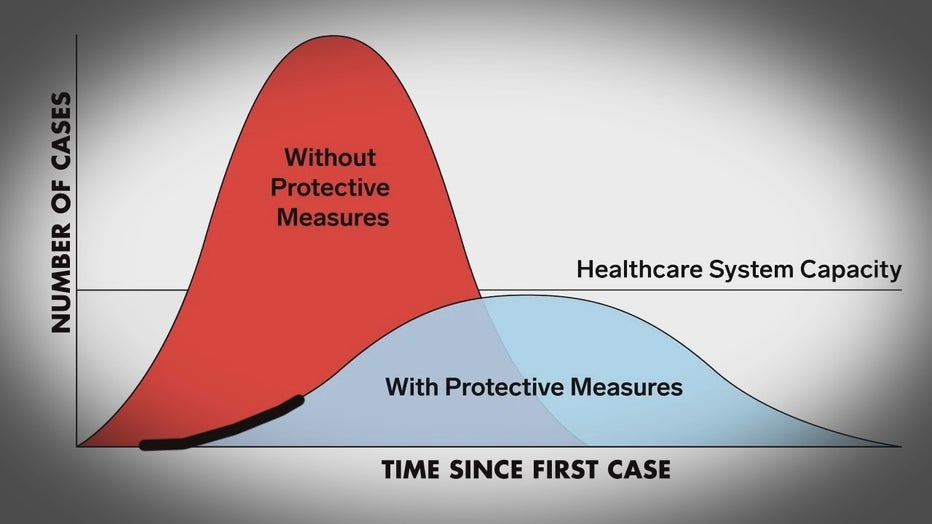 Flatten Out The Curve

There is a narrow opportunity, through early intervention, to reduce number of people being infected, what public health officials call ‘flattening out the curve.’

Those interventions include social distancing techniques, eliminating social gatherings, and closing schools.  The more extensive the interventions, the fewer new infections, delaying the severity out of the outbreak, and delaying its peak.

“My guesstimate,” said Dr. Osterholm, “Is this is not going to be the big one, but it's surely going to be bad one.”