Minnesota State Fair foods: Where to find them year-round

The Minnesota State Fair may only come once per year, but some food and drink vendors are available outside the fairgrounds, so you can get your fair fix year-round.

(FOX 9) - The Minnesota State Fair may only come once per year, but some food and drink vendors are available outside the fairgrounds, so you can get your fair fix year-round.

Here's a look at some of the vendors:

The popular root beer has been available in grocery stores, convenience stores and other retail outlets in the Upper Midwest since 2020. Some restaurants and bars in the Twin Cities metro also offer 1919 Root Beer from the keg. You can also order pony kegs of the root beer online.

The coffee shop has a location in White Bear Lake, and it has a mobile coffee house available for special events.

If you are looking to try something new at the Minnesota State Fair, Icarus Chase with Andy's Garage showed off some new treats that you can pick up at their booth.

The Arepa Bar, which offered three different areas during the first half of the Minnesota State Fair, has a brick-and-mortar location in the Midtown Global Market.

The Ball Park Cafe has one of the longest tap lists at the Minnesota State Fair, featuring several Minnesota craft breweries and exclusive-to-the-fair beers. Although not everything on the tap list is available outside of the fair, you can still imbibe year-round on brews from local breweries in their respective taprooms, as well as local liquor stores, restaurants and bars.

Craving Bridgeman's ice cream after having the Gray Duck Sundae at the Minnesota State Fair? You can visit Bridgeman's Ice Cream Parlor in Woodbury, and also buy it online. Bridgeman's is served at some scoop shops, restaurants and available at some retail outlets, such as Von Hanson's Meat and Hy-Vee.

Cheese Curd Tacos has a food truck that makes stops all around the Twin Cities metro. It posts updates on Facebook on where it'll be next.

Dino's Gyros has a few locations in the Twin Cities in addition to its booth at the State Fair, including in Falcon Heights (not far from the fairgrounds), Coon Rapids, Edina and Woodbury. It also offers catering.

Falafel King, in the Food Building, has locations in Bloomington, Minneapolis and Brooklyn Center. It also has a food truck.

French Meadow Bakery is among the vendors at the Minnesota State Fair that offers a variety of vegan food options.

The popular vendor has brick-and-mortar locations in Minneapolis and St. Paul.

While Giggle's doesn't have a location outside the fairgrounds, you can get your Giggle's fix year-round if you host a private event at the booth.:

While it may not be the same as getting shaved ice at the Minnesota State Fair, Hawaiian Shaved Ice does sell shaved ice makers, snow cone makers, and shaved ice syrup online.

You can order Henry's Kettle Corn online, but it only ships on specific dates.

It's a Fox 9 tradition: every year, we send junior correspondents to the Minnesota State Fair to help us see the Great Together through the eyes of young people. On Saturday, 13-year-old Madeline Bowring showed us some of the vegan food options at the fair that are healthy and also good for the environment.

The vegan butcher has a store in Minneapolis, and you can order online from anywhere.

The Middle Eastern and Mediterranean bakery, grocery and deli is on Central Avenue in Minneapolis. You can also buy Holy Land's products in some grocery stores, as well as online. Holy Land also offers catering.

Hot Indian has a spot at Target Field, and offers catering.

Icee is available at many gas stations, as well as movie theaters and other retail outlets nationwide. Icee floats freeze tubes are also available in grocery stores (Walmart, specifically), in the Twin Cities.

The family-owned business has a food truck. You can find the schedule on the website. 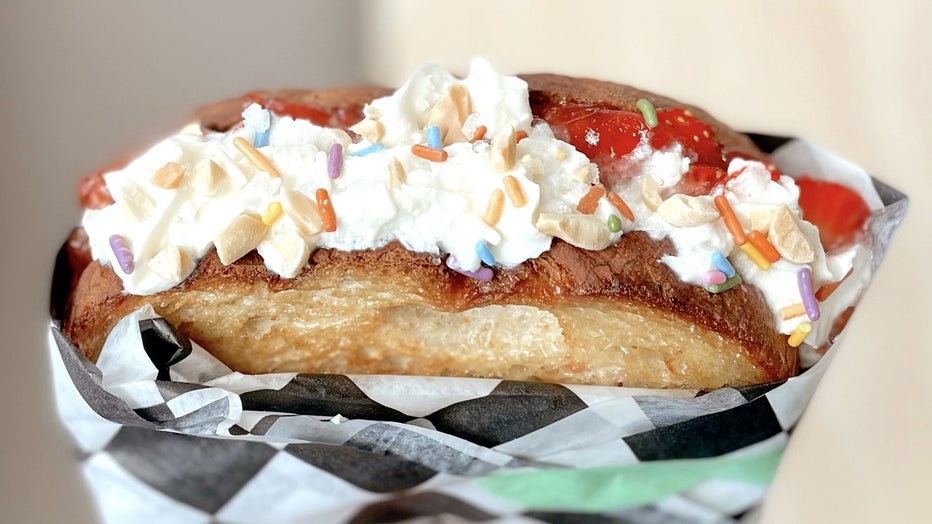 Jammy Sammies, available at The Hanger at the State Fair, is made by Brim, which has a restaurant in Minneapolis.

The local organic freezer pops are available at most local grocery stores and online.

It may not be exactly the same, but Leinenkugel's Brewery and Lodge is a short drive from the Twin Cities in Chippewa Falls, Wisconsin.

The owners of LuLu's Public House — Charlie Burrows and Mike Brennan — are behind several Twin Cities restaurants. Among them: Axel's and Lucky's 13.

Mancini's At The Fair

Mancini's has a brick-and-mortar restaurant outside the fair: Mancini's Char House. It's in St. Paul.

The gourmet Mexican sandwich maker, located in the Food Building, has a year-round location in the Midtown Global Market.

Minneapple Pie is available to order online. Plus, it will soon launch recipes on its website.

Brewed in Minnesota booth at the Minnesota State Fair

Garden Guy Dale K stopped by the Brewed in Minnesota booth at the Minnesota State Fair to learn about locally made beer and the more than 100 craft breweries in Minnesota.

The Minnesota Craft Brewers Guild represents more than 170 breweries in Minnesota, and at the State Fair it serves up hundreds of different brews. You can find these beers at their respective breweries and some liquor stores throughout Minnesota.

While there isn't a Farmer's Union coffee shop outside of the fairgrounds, the vendor dishes up items from local establishments. It gets its baked goods from Birchwood Cafe, its coffee from Bean Factory in St. Paul and its Mocha on a Stick from Grand Ole Creamery.

If you love the fresh apples at the Minnesota State Fair, you're in luck. You can buy Minnesota-grown apples at grocery stores or pick your own at a local apple farm.

The wines poured at Minnesota Wine Country are available at their respective wineries and liquor stores in Minnesota.

New at the Minnesota State Fair in 2022, the company known for its superfood bowls has been expanding quickly across the Twin Cities metro and the United States. Find Nautical Bowls locations here.

New Scenic Cafe has a brick-and-mortar restaurant between Duluth and Two Harbors, and has a Scenic 61 food truck.

The popular sweet treat at the Minnesota State Fair can be found in grocery stores, including Cub Foods and Lunds & Byerlys.

Oof-da Tacos food truck sets up at various locations throughout the state from spring through fall.

The Produce Exchange has a spot at Midtown Global Market.

Behind the scenes: How a Pronto Pup is made

Pronto Pups are celebrating its 75 anniversary at the Minnesota State Fair this year. FOX 9's Cody Matz takes us behind the scenes at the fair to see what goes into making this fair favorite.

Pronto Pups aren't available in stores or via online ordering, but the company does have a food truck that you can occasionally find out in the community. It posts updates on its Facebook page.

Que Viet, known for its egg rolls and wantons at the State Fair, has a brick-and-mortar restaurant on Johnson Avenue in Minneapolis and another location in Brooklyn Center. The restaurant also has a third location, called eM Que Viet, in St. Paul.

Sara's Tipsy Pies has a shop in Stillwater and is available in the frozen dessert section of local grocery stores.

Soul Bowl has two spots outside of the fair, in Richfield and at Graze Provisions and Libations Food Hall in Minneapolis.

Summer Lakes Beverage sells its mixes in stores across the Twin Cities and online.

Tot Boss has a food truck. You can find the schedule on the truck's website or schedule the truck to visit for a large event.

Also at Graze Provisions and Libations in Minneapolis' North Loop.

It has a food truck and sells its specialty sauces online. It is working on opening a brick-and-mortar location at the Brownstone building on University Avenue and Victoria Street in St. Paul in a few weeks.

Did we miss any? Let us know. Email melissa.turtinen@fox.com.