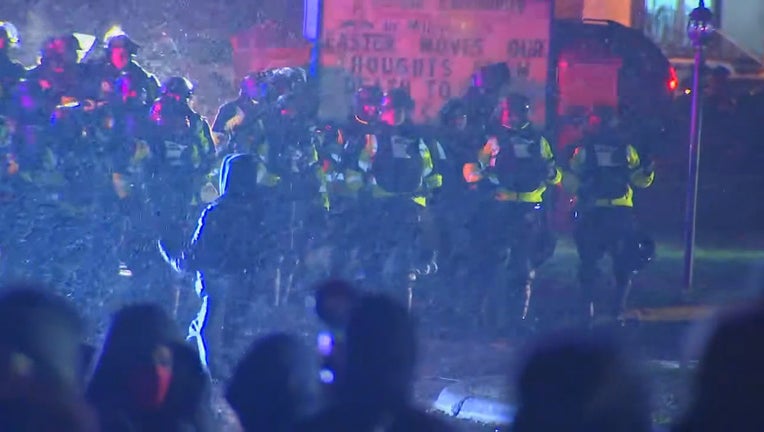 Law enforcement as part of Operation Safety Net respond to a protest outside the Brooklyn Center Police Department after the police shooting of Daunte Wright.

The Minnesota Peace Officer Standards and Training Board took the unanimous votes two days after Derek Chauvin's murder conviction and on the same day Daunte Wright was laid to rest after he was killed by police in Brooklyn Center this month.

Minnesota's police oversight board voted Thursday to take a first step toward banning officers who affiliate with white supremacy groups and imposing limits on police responding to protests.

The regulatory changes are similar to legislation that's alive in the state Legislature this spring. Advocates for police accountability are using the POST Board as a backstop in case the divided House and Senate fail to reach agreement.

"If I’m a chief and find out someone is a member of the Proud Boys (a white supremacy group), for me to discipline, I have to go through just hoops and hoops," said Mendota Heights Police Chief Kelly McCarthy, the board's chair. "If it was a matter of licensure as it should be, we’d be able to take much swifter action."

The POST Board, a collection of law enforcement and community members, has little power to enact the changes itself. It may take 12-18 months for the state's rulemaking process to create new policies matching the votes taken Thursday.

Gov. Tim Walz and House Speaker Melissa Hortman were among those asking the POST Board to act.

"Minnesota faces a moment of reckoning," Walz said in a letter to the board, saying the changes would "increase trust and transparency in policing."

But the legislative route has no guarantees. Republicans who control the Senate have tentatively announced plans for an April 30 hearing on police accountability. Senate Majority Leader Paul Gazelka has not promised to pass any bills this session.

When Democrats on the Senate Judiciary committee sought to include the white supremacy ban in a Senate omnibus bill on April 8, Republicans on the panel rejected the attempt. It failed, 6-3.

At that hearing, GOP members questioned whether there was a link between white supremacy and law enforcement in Minnesota and said the ban would violate officers' constitutional rights of association.

"Whether we agree with it or not, they have the right to associate," Senate Judiciary chair Warren Limmer, R-Maple Grove, said. "I'm very concerned about putting this in the bill. I agree with you on the repugnancy of white supremacy."

Advocates for the change said it's impossible to know the scope of the problem because no agencies collect such data on officers' affiliations. McCarthy said it's been established that white supremacy groups have tried to infiltrate U.S. law enforcement.

Bureau of Criminal Apprehension Superintendent Drew Evans sought to expand the POST Board's ban to more extremist groups, but the board ultimately limited their efforts to white supremacy.

"There's no evidence to suggest that any extremist groups that have any ideology other than that of white supremacy are trying to embed themselves in law enforcement," McCarthy said.

The board also voted to develop a model policy for police response to public assemblies or protests, following repeated clashes outside the Brooklyn Center Police Department after Wright's death last week. The question remains how the POST Board will hold officers accountable for violations.