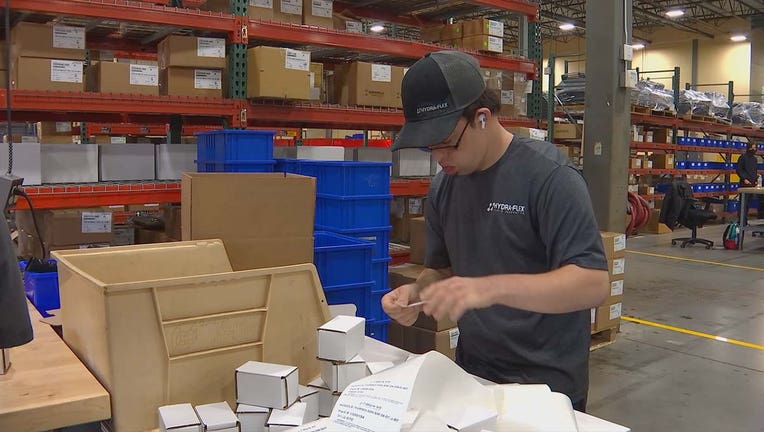 SAVAGE, Minn. (FOX 9) - Minnesota is joining a long list of states taking steps to ensure people with disabilities are paid a fair wage. With a recent boost in state funding, one local organization is working to match job seekers that have disabilities with real jobs.

At work, Tim Strom approaches each day with a bounce in his step. The 29-year-old is an assembler at Hydra-Flex in Savage, a company that manufactures fluid handling technology.

Minnesota organization works to connect workers with disabilities to jobs

Minnesota is joining a long list of states taking steps to ensure people with disabilities are paid a fair wage. With a recent boost in state funding, one local organization is working to match job seekers that have disabilities with real jobs.

Strom is among four employees with disabilities recently hired by the company.

"It’s really important to me because I love this job because it gives me like, family," he said. "I’m a part of the family."

"An inclusive workforce looks like to us is that it includes everyone," added Hydra-Flex Technical Production Supervisor Zach Zimmer.

Zach Zimmer is a technical production supervisor at Hydra-Flex. Amid a nationwide workforce shortage, he says that the company is creating jobs that fits the needs of its employees.

"It’s really shown us that bringing on people with disabilities has been a benefit for both us and the individuals that work here," said Zimmer.

Zimmer says that within a few short months of hiring Strom. "We see our company’s culture and morale be boosted and we see people like Tim come in and have a place to grow and place to socialize and grow with the company and be part of the team."

"What's great about customized employment is that it's customized," said Nicole Rabinowitz.

Rabinowitz is the founder of Inclusive Networking, a consulting firm that connects businesses to job seekers with disabilities.

"I think there's a very high number of people with disabilities that are unemployed, under-employed and I think that traditional employment has created barriers to some people to not be considered for roles that some individuals would be very qualified for," she said.

As part of a state grant, Inclusive Networking is now working with Hydra-Flex, a partnership that led Strom to a new opportunity.

"In my future, I want to stay here because Zach Zimmer is like part of my family," said Strom.

"I think that it really boosts his self-esteem when it comes to being able to connect with people," agrees Zimmer. "You kind of see it every day when he lights up coming in here wanting to come to work."