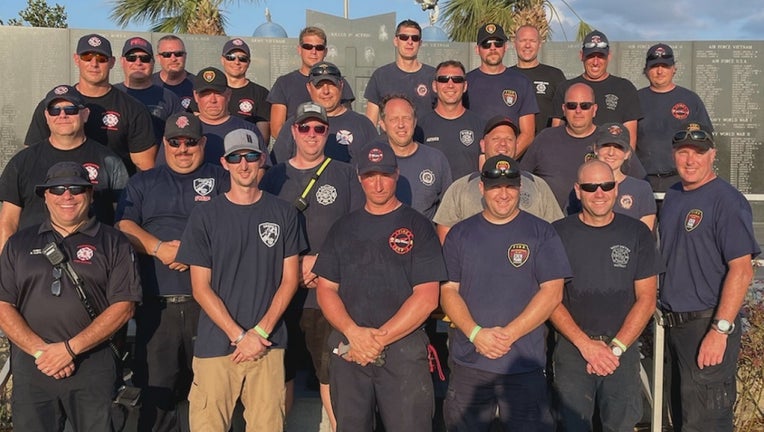 (FOX 9) - Crews from nine different fire departments in Minnesota spent more than two weeks on the ground in Louisiana. After a few days of rest, they're sharing what it was like to help in the recovery efforts.

Hurricane Ida was devastating along the Gulf Coast, leaving more than two dozen dead with thousands still without electricity more than a month later.

Crews from nine different fire departments in Minnesota spent more than two weeks on the ground in Louisiana. After a few days of rest, they're sharing what it was like to help in the recovery efforts.

The firefighters came home with some incredible stories and experiences helping, assisting any way they could at a time of such desperation.

"You get there and you see the damage," said Chief Rodger Coppa with Plymouth Fire Department. "You can’t articulate the devastation."

At times, the Minnesota firefighters returning home from the gulf coast just could not believe their eyes.

"It’s damage like you have never seen before up here," said Zack Bonnema with the Chaska Fire Department. "I have never been a part of something like that."

Particularly those assigned to hard-hit Grand Isle, about 100 miles south of New Orleans, where the homes had been built on stilts to protect them from rising water.

The community took a direct shot when Ida made landfall at the end of August.

"And they’re just pylons with a floor on it," said Chief Coppa. "There’s no house on it anymore. It’s just, they are sticks littered across this old neighborhood that used to have houses on top, that no longer have houses anymore."

Chief Coppa, among 22 Minnesota firefighters who volunteered, answering Louisiana's desperate call for assistance after the deadly, Category 4 storm destroyed neighborhoods and left thousands in the dark without electricity.

For some two weeks, the group left behind families and their home communities, to live out of a tent on the campus of Nicholls State University, helping with debris removal, distributing tarps and water, and checking on the needs of storm victims.

"It’s just part of the fire service," added Jory Danielson, a firefighter with Crosslake Fire Department. "We want to help out when there is a need for help. It’s just instinctive. And we hope that favor will be returned if Minnesota needed that same request or that same help."

The response came as part of a nationwide emergency assistance compact which Governor Walz signed off on.