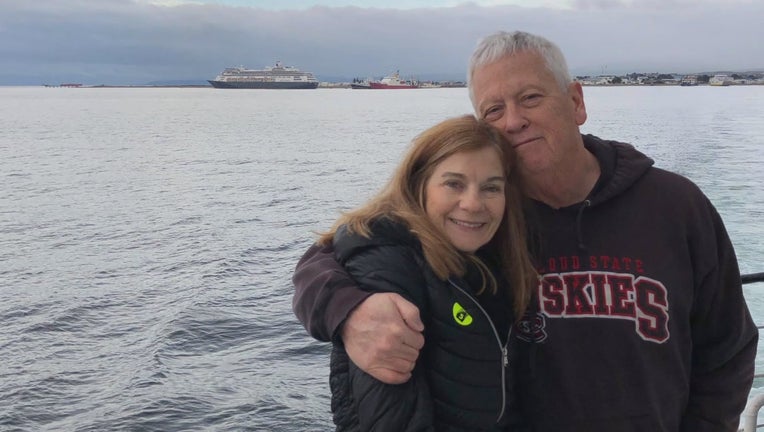 Andy Vinson and Kathy Leighton Carton of St. Cloud, Minnesota are stuck on a cruise ship, which has confirmed cases of COVID-19 on board.

(FOX 9) - Holland America Cruises confirmed Friday that four passengers have died on board one of its ships, which is currently stuck off the coast of Panama. It’s unclear if they died from the novel coronavirus, but the cruise line has confirmed cases on the MS Zaandam cruise ship.

A family from Minnesota is among the passengers on the cruise ship. They took off from Buenos Aires on March 8. They told FOX 9 the situation started getting worse after the global pandemic was declared. Their ship has been denied access to port and is now not being allowed through the Panama Canal.

What was supposed to be a vacation they'd been planning for a year is now a nightmare - one they hope ends soon.&nbsp;

Andy Vinson and Kathy Leighton Carton of St. Cloud say their cruise was supposed to end nearly one week ago, but now they are stuck in limbo.

“Actually sat outside of Punta Arenas because they told us they were going to allow us to dock, and then after two days they denied us,” said Leighton Carton.

As they sit in their rooms for yet another day, they await the arrival of another Holland America ship set to deliver medical supplies and medical staff.

“We knew that it has definitely been escalating,” she said.

According to the cruise line, 53 guests and 85 crew are sick. There are 2 confirmed COVID-19 cases. As of Friday morning, four passengers have died, though the cause remains unclear. The push to get passengers off is even more urgent.

“That brings it to a whole other level and the number of people that report of being sick increases every day,” said Katie Eaves, Kathy and Andy’s daughter.

In an effort to bring their story to the states and to bring them home, Katie has been reaching out to government officials seeking help.

“For a long time they were trying to remain positive and they were, but now that there have been deaths on the ship, it’s become something entirely something else,” said Eaves.

Congressman Tom Emmer, who represents the couple’s district, says his staff have been working to bring them back to Minnesota.

“Since this crisis began, my office has been working non-stop to bring constituents like Andy and Kathy home safely,” said Emmer in a statement. “Minnesotans who were abroad when this pandemic worsened deserve for their government to secure their return. I will continue to advocate for my fellow Minnesotans as we battle this virus together.”

What was supposed to be a vacation they'd been planning for a year is now a nightmare - one they hope ends soon.

In a statement, Holland said the priority of those that will be transferred off the ship will first go to those that are inside staterooms and then those that are over the age of 70. Any guests that are currently sick will remain on board.