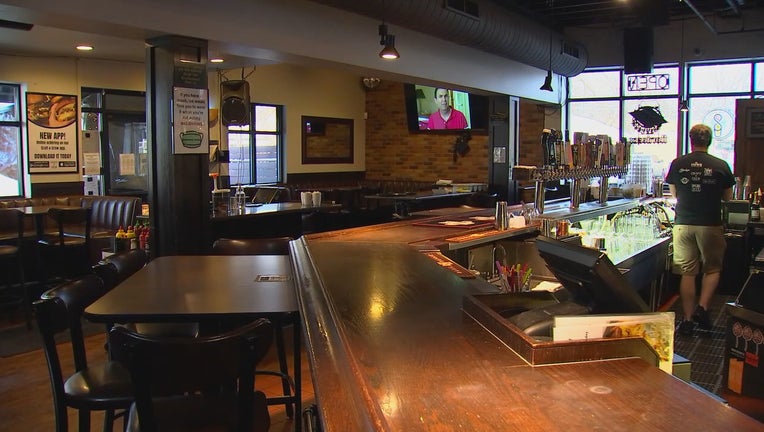 Occupancy changes that went into effect on Friday allow bars to get back to normal business. (FOX 9)

PLYMOUTH, Minn. (FOX 9) - Troy Reding called a recruiter this month to find a sous chef for one of his restaurants. Meanwhile, about 140 other Twin Cities restaurants needed a sous chef, too.

Minnesota businesses fully reopen Friday, but where are the workers?

"It's disappointing and it's difficult because the demand is there," Reding said in an interview at one of his restaurants, Rock Elm Tavern in Plymouth. Reding said he could double his 100-person staff but, "they just aren't there."

Reding said it not a money issue, because no one at his restaurants makes less than $18 an hour, with servers earning $35 an hour after tips. Many workers left for more stable industries after Minnesota forced restaurants to shut down twice during the pandemic. Others have said they're making more from expanded unemployment benefits, he said.

Employment in Minnesota's hospitality industry shrunk by more than 50 percent from February to April 2020, state economic development data indicate. About three-fifths of those lost jobs have returned.

Republicans blame the $300 a week federal unemployment boost for the worker shortage and have called on Gov. Tim Walz to end it. The extra benefits are keeping workers at home, GOP lawmakers say.

Walz said this week he will not end the benefits before they're scheduled to run out in September.

"I know that's a narrative that's out there, that you give people this $300 and they'll stay home," Walz said. "There's a lot of good, solid data that, for the most part, that's not the only thing that does it."

Minnesota economic development officials said they're calling thousands of unemployed workers each week, pointing them to job opportunities in their region.

"I think if the pandemic taught us anything, it's that some jobs have a long life and others are more vulnerable," Grove told reporters last week.

A bill in the Minnesota House would give $2,000 bonus pay to workers who return to the job this summer. It's unclear if the legislation will gain traction in the June special session, though GOP Senate Majority Leader Paul Gazelka has endorsed the idea of incentive pay.

"We have to get people off of unemployment who can work," Gazelka, R-East Gull Lake, said in an interview. "There's no reason now because of the pandemic not to be working."

Reding said he was seeking front-of-the-house and back-of-the-house staff, especially at Holman's Table in St. Paul, where he's operating at reduced hours.

"It is going to have a lasting effect," he said of the labor shortage.