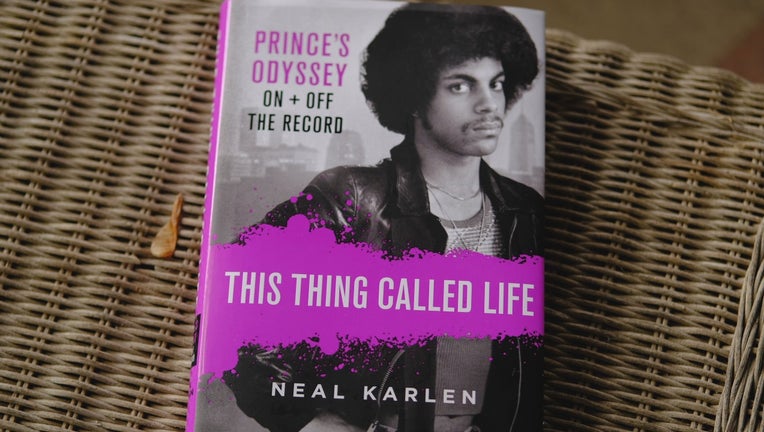 MINNEAPOLIS (FOX 9) - A Minnesota author and longtime Prince confidant is opening up about the legendary music icon in a new book.

In his book, “This Little Thing Called Life: Prince's Odyssey On and Off the Record", Neal Karlen chronicles how he met the superstar at the height of his fame a few months after Purple Rain.

A Minnesota author and longtime Prince confidant is opening up about the legendary music icon in a new book.

Karlen ended up writing three cover stories on Prince for Rolling Stone, becoming the rock star's only confidant in the press for a dozen years. Their friendship continued even after Karlen left the Prince beat. The Purple One would call him in middle of the night to chat.

"Everything from the Vikings to being depressed not having any friends,” said Karlen. “I would say it was like two Minneapolis guys talking about women and music and death."

Karlen recorded some of their calls and conversations, like one featuring Prince talking about his belief in God.

"It's so nice to know there is something else and if we're wrong and if I'm wrong and there is nothing big deal, but the life I just spent I had a reason to spend it - beyond myself," said Prince in the recording.

Karlen nearly lost those recordings and everything else when Karlen's apartment building caught on a fire a few years ago. One of the items that survived included a partially burned handwritten letter Prince wrote telling him to cherish their friendship,

"He's saying we're friends,” said Karlen. “He's saying thank you. He's showing he cares. I couldn't admit to myself this guy's a friend. When I realized how stupid I was, I just cried."

In the end, Karlen says Prince was a man of many talents and contradictions, but he is grateful he got to know the person behind the purple.

“I just want people to know there was a human being inside Prince," he said.