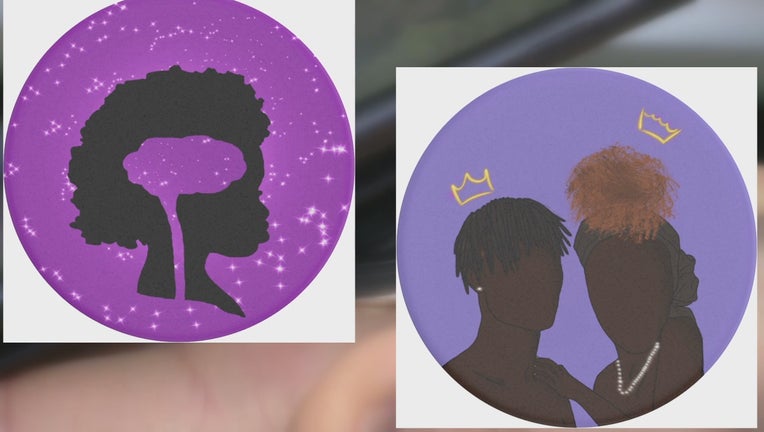 Two Minneapolis teens made PopGrip designs that will be sold in Best Buy stores.

MINNEAPOLIS (FOX 9) - Two Minneapolis teenagers are getting national exposure for their work in a mentoring program.

In November, Weslyn and Dredrick created PopGrip designs for PopSockets, which are now being sold in Best Buy stores across the country.

Two Minneapolis teenagers are getting national exposure for their work in a mentoring program.

"It was mind-blowing. Everyone could be walking around with something I made, you know," said Dredrick.

The teens are part of the Best Buy Teen Tech Center at Hope Community, an afterschool program that exposes students to technology.

"I already liked technology, computers and gaming and all that, music, photography, drawing," said Dredrick. "I already liked all of that, I just didn’t know where to go to do it, so when they opened that up, it created a bunch of different doors for everything."

Among those opportunities was a mentorship with the designers of PopSockets, an accessory that makes phones and tablets easier to grip.

"Just being around people who are professional in so many different ways, really rubbed off on me," said Weslyn.

When asked to design a PopGrip of their own, the teens say they found inspiration from within.

"I wanted to focus on the mind and so much happens in the mind, that’s really where ideas come, and things become real," said Weslyn.

Weslyn and Dredrick's art was among four winning designs nationwide. 50 percent of every sale is donated to the Best Buy Foundation in support of amplifying young Black artists.

"Talent is equally distributed, but opportunity is not," said Andrea Wood, vice president of social impact at Best Buy. "And what we're trying to do with the Teen Tech Center is making sure that opportunity is available for talented young people."

"When I first started, I never thought that I would be doing design work for Best Buy and PopSocket," said Dredrick.

"Black girls like me, they don’t see graphic design as an outlet for them to put the creativity in to. So like showing that it’s available for Black kids is very, very important," said Weslyn.