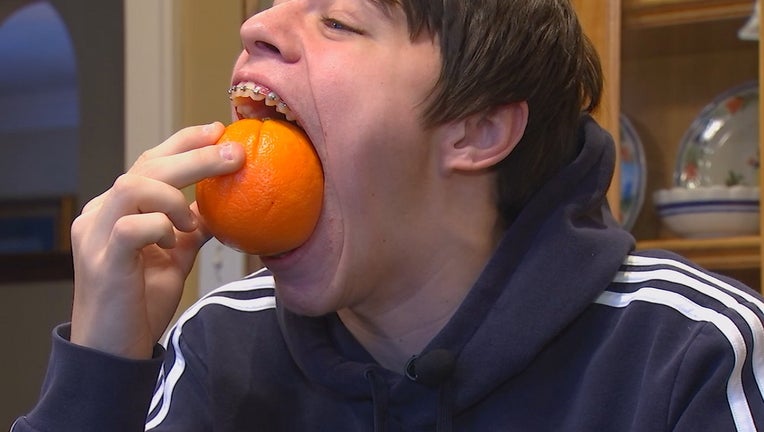 MINNEAPOLIS (FOX 9) - For most people, being accused of having a big mouth would be an insult. But for Isaac Johnson, it's a compliment. In fact, he officially has the biggest mouth in the world, for the second time.

For most people, being accused of having a big mouth would be an insult. But for Isaac Johnson, it's a compliment. In fact, he officially has the biggest mouth in the world, for the second time.

FOX 9 first introduced you to Johnson a couple of years ago after the now 16-year-old got into the Guinness Book Of World Records for having the world's biggest mouth, at over 3 and a half inches.

After losing that distinction to a Pennsylvania teen a few months later, Johnson regained the record by measuring his mouth at a whopping 4 inches earlier this year.

I guess it just grew over time as I grew. Maybe doing it, opening my mouth, stretches it out. Maybe that helped too. Yeah mainly it was just over time," said Johnson.

Since then, Johnson has appeared on Jimmy Kimmel Live, with guest host Wanda Sykes, where they played a game to see if certain objects like a brick, a magnifying glass, or a VHS tape of the movie Jaws, would fit into his massive maw.

"The baby doll was not my favorite. It was a baby doll. How weird does that look," said Johnson. "It was fun in the end but scary at first."

Johnson has also been invited to Italy to appear on a tv show about Guinness World Record holders in the spring.

In the meantime, he hopes to hang on to his new world record because losing it for a second time would be tough to swallow.

"It's been an amazing unforgettable experience that I'm very lucky to just have naturally. To just have a naturally big mouth," said Johnson.