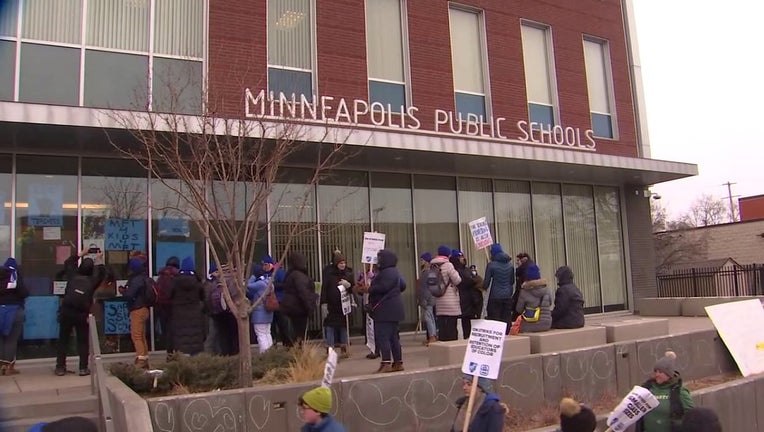 ST. PAUL, Minn. (FOX 9) - New, bigger contracts for Minneapolis Public Schools teachers and school aides will force budget adjustments, the superintendent says, though the district may have a friendly ear at the state Legislature amid a budget surplus.

Minneapolis teachers have a new contract. Will MPS need more state money to pay for it?

New, bigger contracts for Minneapolis Public Schools teachers and school aides will force budget adjustments, the superintendent says, though the district may have a friendly ear at the state Legislature amid a budget surplus. Teachers will get a $4,000 one-time bonus in April and at least a 2 percent pay raise. Education support professionals are in line for a $6,000 one-time bonus, with half due in April and the second half in 2023.

"The contracts we put forward are going to require us to take a look at our budgets and make some adjustments going forward," Graff said. "We know we’ll have to make those things happen in the next couple weeks and months."

For any public entity that receives state funding, there are two places to look short-term for funding: either by making cuts elsewhere in the budget or by asking state lawmakers for more money. Lawmakers are currently debating how much of the state's $10 billion projected surplus on schools.

Monday, it appeared that the Minneapolis strike resolution had done little to change the talking points of both sides. School administrators, teachers' unions and Democrats are advocating for more spending. Republicans who control the Senate have not committed to additional funding.

"There are no safe bets in the Legislature," said House Education Chairman Jim Davnie, DFL-Minneapolis, who said MPS officials and people from numerous other districts have been in his committee asking for more state support. "The good news is, the state has the resources to deliver."

Gov. Tim Walz has proposed doubling the education funding formula increase for 2022-23. During last year's budget negotiations, the Legislature agreed to a 2 percent increase. Walz is seeking a 4 percent boost.

The DFL governor has also made a series of other K-12 spending proposals, including $73 million for mental health support in schools.

"They were awash in money. I heard some people come up to me and say in private, there’s so much money, they’ll be burning it in the parking lots," Chamberlain, R-Lino Lakes, said in an interview. "There’s a lot of money out there. It’s not a budget year. They should be thinking about the kids and the disruptions they’ve suffered over two years."

Chamberlain said he had not followed the nearly three-week teachers' strike.

Walz said he still thinks the Legislature will reach a deal to increase education funding. The state has such a large budget surplus that lawmakers can fund multiple priorities, he said.

Last year's funding increases have only caught districts up from pandemic-related challenges, legislative Democrats said. They argued that more is needed to fight inflation, which stood at 7.9 percent in February, a 40 percent high.

Minneapolis Public Schools' finance staff is assessing the impact of the new labor contracts and will have an updated cost estimate this week or next, a spokeswoman for Graff said.