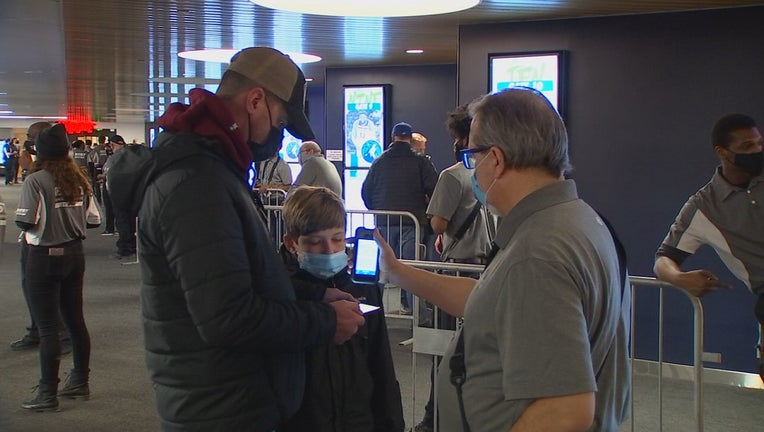 A worker checks vaccine cards at the Target Center after a mandate goes in effect in Minneapolis. (FOX 9)

(FOX 9) - Starting Wednesday, January 26, large event centers in Minneapolis and St. Paul, like museums or venues hosting sports games, concerts or other entertainment, had to require visitors to show a proof of vaccination or negative PCR COVID-19 test taken within the last 72 hours.

Vaccine mandates at Minneapolis and St. Paul restaurants went into effect earlier this month, but the mandate affecting large event centers and entertainment spaces started a week later, giving those spaces time to prepare. The mandate is set to expire on Monday, February 28.

Starting Wednesday, January 26, large event centers in Minneapolis and St. Paul, like museums or venues hosting sports games, concerts or other entertainment, had to require visitors to show a proof of vaccination or negative PCR COVID-19 test taken within the last 72 hours.

The Target Center is hosting 22 events during that time frame, including several Timberwolves games, concerts and other events. Before the mandate, staff had experience holding a vaccine-required event. Both the Dave Chappell and Pentatonix shows independently required proof of vaccine or a negative test.

Steve Sawyer, the Director of Hospitality and Event Management at Target Center said, from those events, they learned they would need more staff to make the vaccine verification process go faster. He said they have around 30 extra staff members on board to help while the mandate is in effect.

To enter the game Sunday, a representative from a contracted company called Best, first checked fans' vaccine card or COVID-19 test before their ticket was checked, and they went through security. For people about the mandate or did not have the proper documentation, the Target Center created a space where visitors can pay for a rapid PCR test. As long as that test came back negative, they were cleared to enter the game.

"We’re going to be doing everything we can do to get our guests into events," Sawyer said.

"[The process was] super easy. We just had pictures of our vaccine cards, and we just showed it to the person at the gate, and they gave us a stamp," fan Caty Larson said.

While the process appears to be quick, Target Center staff admit it may not be perfect.

"Ultimately we’ve told our staff we’re not the police but if someone is really going to fake something they’re going to be able to do it. We really just want to put in that good effort to keep them out," Sawyer said.

Even with testing options on-site, Sawyer said they have heard from fans choosing not to attend events at Target Center while the mandate is in place.

"We’ve gotten some calls for sure this week. Definitely, some asked for some refunds and some folks that don’t want to come down to an event over the next month, whatever event they have tickets for. We’re handling them on a case-by-case scenario. We’re trying to make it very clear to guests that they will be able to get in if they put in a little effort our goal is to get them into the game," Sawyer said.