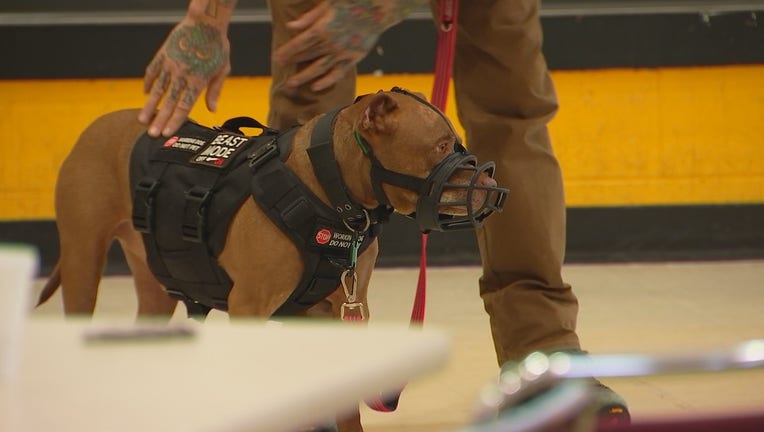 Minneapolis Police attended this dog training session to learn how to better interact with dogs in the field.

MINNEAPOLIS (FOX 9) - Minneapolis Police went to dog school Wednesday to learn how to better interact with our four-legged friends when responding to calls in the field.

The training comes after an incident in 2017 where an officer shot two dogs while responding to a false burglary alarm.

Minneapolis Police went to dog school Wednesday to learn how to better interact with our four-legged friends&nbsp;when&nbsp;responding to calls in the field.&nbsp;

The training was led by Underdog Alliance. It’s a California-based organization that takes in dogs who have a history of bad behavior or have been put in a situation where they responded with aggression.

“What we look for are dogs where the environment and the stimuli they were presented with in that moment cause a very brief reaction that we can then help them get passed,” trainer Steffen Baldwin said.

Baldwin travels the country with his dog, Chesty, teaching officers how to read dogs’ body language to help them better understand how to react to dogs’ aggression.

Baldwin says Chesty is the perfect example of why officers should learn skills to better interact with dogs. In 2013, Dayton, Ohio police were called to check on a dog, Chesty, who was sleeping under a bush. When officers arrived they nudged Chesty to wake him up. Out of fear, Chesty had an aggressive reaction. Officers shot Chesty. Thankfully, he lived and was later adopted by Baldwin and Underdog Alliance.

“He’s basically our little case point about why what you see in that moment is not the entire picture of who the dog is,” Baldwin said.

One of the things Baldwin teaches to officers is to pay attention to a dog’s stance. Their stance will tell you if their reaction is offensive or defensive.

He says when a dog is threatened and reacts offensively, they will try to make themselves look big and will widen their eyes. A dog’s ears will go forward, their tail will stick up and they will put their weight on their front legs.

“When their body weight shifts forward, like a boxer, they’re giving you a tell. They’re showing that they are going to run towards you,” Baldwin said.

When a dog displays defensive aggression it will shift its weight back. Their ears will go back, their tail will go down and they will put their weight on their back legs because they want to run away.

Baldwin recommends officers travel with meat or cheese sticks while they’re out in the field. Baldwin says the dopamine dogs get from their favorite foods will immediately decrease their stress. He says dogs can have a similar reaction with a squeaky toy.

Officers with Minneapolis Police say they run into situations with dogs on an almost daily basis, whether they are directly related to a call or are just near a scene they are investigating.

“You never really know exactly how a dog is going to respond to the presence of a person being there so that’s always a challenge. Is the dog going to be aggressive or friendly?” Lieutenant Johnny Mercil with the Minneapolis Police Department said.

Lt. Mercil says the training will hopefully prevent incidents like the one back in 2017 from happening again.

“We have had some issues and this is a great opportunity for our police department to teach our officers some positive things about animal behavior – some things they may not have thought of before,” Lt. Mercil.