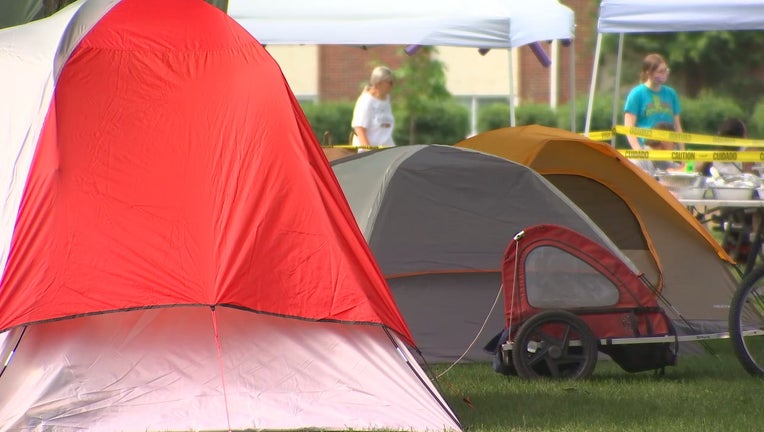 Tents stand in Powderhorn Park after residents were kicked out of a hotel acting as a shelter in Minneapolis. (FOX 9)

MINNEAPOLIS (FOX 9) - As a homeless encampment at Powderhorn Park in Minneapolis continues to grow, there’s a debate about whether they should be allowed to stay.

The Minneapolis Parks and Recreation Board considered moving most of them out, but that did not happen ahead of Wednesday night’s meeting.

As a homeless encampment at Powderhorn Park in Minneapolis continues to grow, there’s a debate about whether they should be allowed to stay.

Instead, protesters rallied over a controversial resolution that would limit the number of parks with encampments to ten and reduce the number of tents in the park to ten.

The tent encampment at Powderhorn has been growing since June 10 and hundreds of tents are not up at 35 parks across the city. Some Minneapolis residents think the situation is now out of hand.

“This all could’ve been avoided by having maybe reopen the navigation center, having better facilities at the old Sheraton rather than just people camp in parks,” said Joe Tamburino, who recently wrote an op-ed about encampments throughout the city.

Wednesday’s Park Board resolution on those tents was challenged by some commissioners speaking out before the agenda was approved.

“I would like to remove the agenda item related to the sanctuary,” said Commissioner Londel French, a Minneapolis Parks and Recreation Board member.

“Maybe some of the commissioners come down and talk to the residents maybe do a shift, maybe do a volunteer shift. See what it’s like down there,” said French.

Others wanted to see it kept on the agenda.

“Discussing this item is, I think, it is incredibly timely and pertinent,” said President Jono Cowgill.

The resolution, though, was removed from the agenda in a 5-4 vote. A public comment followed, including from encampment residents who still don’t know what’s next.

“Is the park appropriate? I don’t know. We haven’t given it enough time yet. Tell us we’re going to be there and I promise you we’ll have organization,” said Rico, a man staying in the park.