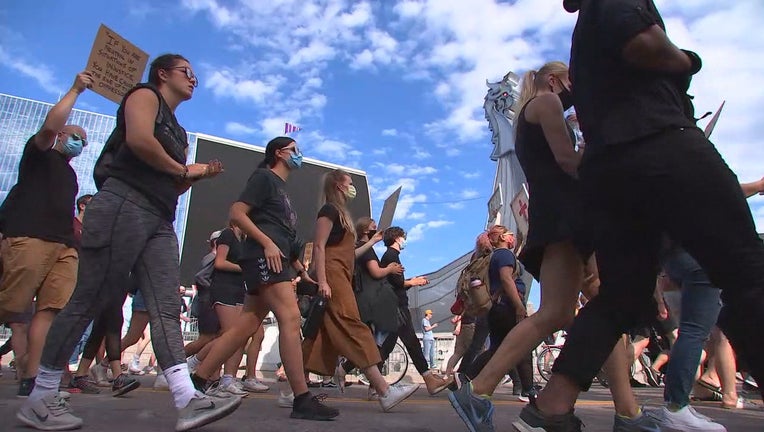 MINNEAPOLIS (FOX 9) - Marchers took to the streets of Minneapolis during separate protests on Saturday, calling for justice for George Floyd while hoping to maintain the momentum for social change created by Floyd's death.

It's been nearly three weeks since George Floyd’s death in police custody, and the calls for change continue. Protesters marched from the Hennepin County Government Center to the Minneapolis Police Department's First Precinct where organizers demanded change for policing and called for equality.

Marchers took to the streets of Minneapolis during separate protests on Saturday, calling for justice for George Floyd while hoping to maintain the momentum for social change created by Floyd's death.

"You have to get your hands dirty, you know," said protester Johnny Tsegaw.

The rally was followed by another protest that started not far away, outside U.S. Bank Stadium, organized by a newly formed nonprofit called the 10K Foundation.

"Something inside of all of us broke and this is the result," said PJ Hill, who was one of the organizers of the event. "People are coming together; everybody across America is saying, enough is enough. We need change."

Some are coming out because they want something different for their children.

"For me as a father, a husband, and a community activist, I want this society to function as best as possible for those at the bottom and even for those at the top," added activist Jonathan Mason. "I just want a fair ballgame for everybody."

Others are here because they say they can’t just sit back and do nothing.

"When you’re out here, you’re really showing everyone it really matters and I think that’s the important part," said protester Carly Parsons.

As these groups push to keep the momentum going, they know it is going to take work from everyone.

"I just want as many people to be on board with this because it’s going to take all of us," added Hill. "Not just the minority but the majority."